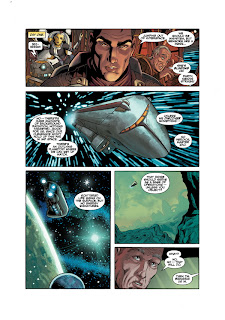 If you’re following the SWTOR: The Lost Suns comic series, you’ll be excited to hear that Newsarama has a full, 6 page preview of the comic so you can check it out for yourself. I have been hooked on the series since I got the first issue, hand-signed, in person from Alexander Freed himself. You don’t even have to be a traditional comic fan to appreciate the story of these comics.

The series is written by BioWare Senior Writer Alexander Freed and it follows the story of Theron Shan, son of Jedi Master Satele Shan. It follows Shan’s quest to stop the war from restarting and the series gives us a good back story to the game, SWTOR and an idea of the type of storytelling we can expect from BioWare in SWTOR.

Even if you have yet to read the first two issues of the Lost Suns, then you will appreciate this fun preview. In fact, you’re probably going to like it so much that you find yourself ready to go out and buy all the issues out already.