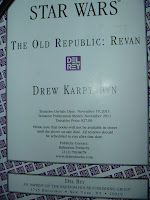 We found an interesting write-up about the Revan novel that contains spoilers of the storyline for SWTOR and the novel.

In a post on Spacebattles.com, user “Sparris” posts, “After getting and reading an uncorrected proof of this story, pretty sure most people will think it sucks.”

He goes on to give about 600 words or so of a summary of the novel that portrays it in a less-than-interesting light. However, we also have to keep in mind that this is one person’s opinion and a rough summary at that and we don’t actually see any more than a pic of the alleged cover of the proof of the novel.

There are three main characters throughout: Revan, the Exile (now named Meetra Surik,) and a Sith Lord in the Emperor’s service named Darth Scourge.

Revan’s story is pretty simple. His dreams are bothering so he leaves his newly pregnant wife to go find out what’s going on. He starts off his quest by visiting a planet the Mandolorians are on and helping Canderous find the old Mandalore‘s mask. Kills Canderous’ wife in the process. The information he finds there leads him to the Emperor’s home world, which has been stripped of life and made completely empty of the Force. Revan upon leaving is shot down by Scourge and his master and then drugged for two years so he can’t do anything.

He goes on to say that Scourge is also simple he says “Karpyshyn takes the game he did not write for and retcons everything interesting out of it.”

Blah…blah…blah… basically he hates the story.

I don’t know how I feel about his analysis though. Personally, I like Karpyshyn’s work and while I have yet to read this novel, I don’t know how pressed I am to take the opinions of some anonymous guy on the Internet. It’s far from an official synopsis and I prefer to judge my books for myself.

If you don’t mind the spoilers, give it a read for yourself and let us know what you think.