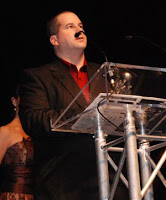 Random House has published their 2011 Fall Catalog, and it has goodies for us Star Wars: The old republic fans. Apparently Drew Karpyshyn will be the auther of a upcoming SWTOR novel yet to have a titel.

Drew Karpyshyn was Senior Writer on Star Wars: Knights of the Old Republic as well as
both Mass Effect and Mass Effect 2. He has also wrote Darth Bane: Path of Destruction, Darth Bane: Rule of Two, and Darth Bane: Dynasty of Evil which are some of my favorite Star Wars novels.

# EXCITING FAN-FAVORITE TITLE TO BE REVEALED: On April 15th, the secret title of this novel will be revealed to the world! The cover will be revealed at in July at San Diego Comic-Con, and the first excerpt from the novel will be released!
# BIG GAME: Star Wars: The Old Republic will be a story-driven, massive multiplayer, online PC game, where gamers will experience the next generation in video-game storytelling, providing unprecedented immersion into an epic Star Wars saga that unfolds based on their choices and actions.
# POPULAR STAR WARS AUTHOR: Drew Karpyshyn is the New York Times bestselling author of our Darth Bane novels: Star Wars: Path of Destruction; Star Wars: Rule of Two; and Star Wars: Dynasty of Evil!
# CLOSE RELATIONSHIP BETWEEN GAME AND BOOK: This novel was written with the full cooperation and creative consultation of the BioWare/LucasArts game-design team. As one of the writers on the game, Drew Karpyshyn has intimate knowledge that will color all aspects of the novel. All possibilities for cross-promotion will be exploited!
# NEW OLD REPUBLIC STORYLINE: The Old Republic is a huge era that is still relatively untouched in terms of new Star Wars content, and a time that fans are eager to explore further.
# STAR WARS GAME TIE-IN NOVELS ARE POPULAR: The Star Wars Republic Commando video-game tie-in novels have been highly successful, and the novel based on Star Wars®: The Force Unleashed(TM) was a #1 New York Times hardcover bestseller! Our first TOR novel, Fatal Alliance, was a New York Times hardcover bestseller.
# HUGE GAMES: Star Wars®: Knights of the Old Republic(TM) has sold more than 2 million copies, and Star Wars®: The Force Unleashed(TM) has sold more than 7.8 million copies!
# Copyright © 2011 by Lucasfilm Ltd. & ® or (TM) where indicated.