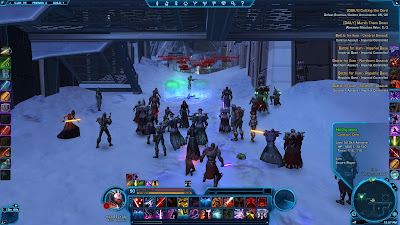 There’s been a lot of talk about SWTOR, its cost, its expectations and whether or not it is actually too big for its britches in the gaming scene. LA Times recently covered a piece which questions whether or not SWTOR could be the “costliest game of all time.”

With a price tag approaching $200 million, Star Wars: The Old Republic is likely to be the most expensive game of all time to produce — and a colossal gamble for the game’s publisher, Electronic Arts Inc.

And they go on with:

BioWare, the EA studio responsible for the online game, had spent close to six years on the title, hiring hundreds of programmers, writers and artists, as well as a legion of contract workers. The hope is that The Old Republic will attract millions of players, each willing to spend $60 to buy the game and $15 or so a month to play out their fantasies of being Jedi knights or Sith warriors.

Many will agree that they have set a high standard for themselves with such a huge budget on a game. Will they be able to live up to the hype and the investment?

In still another LA Times post, they discuss the game that BioWare is taking with such a large project. They explain:

The narrative is so huge that writers created a 1,000-page “bible” to keep the details straight, and the director recently asked a colleague not to spoil moments he hadn’t yet seen.
It’s not a movie or a TV series. It’s Star Wars: The Old Republic, the most expensive, ambitious and riskiest video game ever produced.
The Times writers might be on to something here- there is definitely a big risk involved in this game and honestly, many who have tried SWTOR just don’t feel it’s lived up to the expectations and hype. But then again, you cannot please everyone and there are loads who are still happy to pay their $15/month to keep playing in the galaxies far, far away.
“The real test is whether they can retain subscribers in the long run,” said analyst Doug Creutz of Cowen & Co.
That’s really what it all comes down to, isn’t it?