The Official Raptr Blog has published another update on the most played PC games of October and you might be a little surprised at the results. First, SWTOR is up in the rankings from 15th to 12th (perhaps people getting prepared for the new content) but in addition to this, we see some games no longer in the top rankings at all. 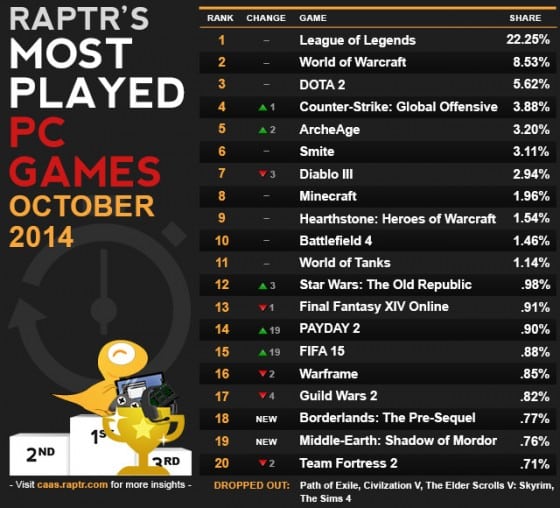 As you can see from the chart, Wildstar and ESO are not even on the chart anymore and GW2 has dropped below SWTOR. TF2 is still in the top 20 but just barely, after dropping two ranks. We have two new entries on the list with Middle-Earth: Shadow of Mordor and Borderlands: The Pre-Sequel. Another entry in the top five that I’ve personally decided to check out is ArchAge. Battlefield 4 and Minecraft are in the top 10. WoW really picked things up (with their new expansion out now, it’s no surprise) but they still didn’t come close to taking the lead from League of Legions, reigning the top spot with a playtime increase of 2.78% compared to September. WoW was, however, up 16.32% in October versus last month.

All of that said, there are some things to note of significance about the findings by Raptr. For one, games connected to Steam and Blizzard’s Battle.net get a boost to their reported play time with Raptr, since it automatically integrates into those two services. Games not using Battlenet or Steam would have to be logged manually to track time. While some worry that the numbers might be skewed a bit, it does still seem to be a fairly accurate measure of the ups and downs of the various games as well as how popular they are with PC gamers.