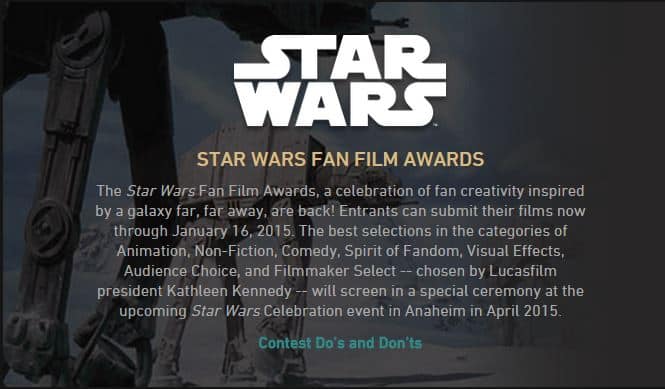 We are so excited to tell you all that after taking three years off, the Lucasfilm Star Wars Fan Film Awards will be returning to us this year. Lucasfilm has officially released the nominees for this year and you can go vote in the Audience Choice category. We think that the winners will probably be announced during the Star Wars celebration happening next month.

The Star Wars Fan Film Awards, a celebration of fan creativity inspired by a galaxy far, far away, are back! In this trailer, revisit past winners and entries ranging from animation to live-action comedy, and get an important tip from Lucasfilm’s Pablo Hidalgo.

Entrants can submit their films now through January 16, 2015. The best selections in the categories of Animation, Non-Fiction, Comedy, Spirit of Fandom, Visual Effects, Audience Choice, and Filmmaker Select — chosen by Lucasfilm president Kathleen Kennedy — will screen in a special ceremony at the upcoming Star Wars Celebration event in Anaheim in April 2015.

NO PURCHASE NECESSARY. Void where prohibited. Open to persons, 13 years of age or older, who are, as of entry, legal residents of, and physically located within, the 50 United States, D.C. or Canada (excluding Quebec). Minors must get parent’s permission to enter. Entries must be received between 12:00 AM (PT) on 10/9/14 and 11:59 PM (PT) on 1/16/15. Limit one (1) entry per person. Many Will Enter. Few Will Win. Prize does not include accommodations or transportation between winner’s home and the Star Wars Celebration Anaheim event. See Official Rules for full details including eligibility, entry requirements, judging information, winner selection process, prize descriptions & limitations.