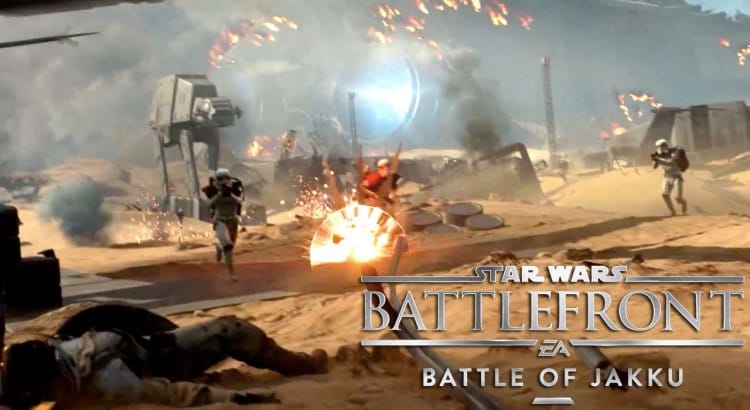 The free DLC pack is set to come out tomorrow and with this, DICE and EA have just released a new trailer for the Battle of Jakku!

All gamers who pre-ordered Star Wars: Battlefront will be the very first ones to enjoy the Battle of Jakku. The Battle of Jakku was the pivotal time when the New Republic confronted certain Imperial holdouts on a desert planet, located on the Outer Rim. This takes place during the time after the Rebel’s one in the Battle of Endor, gamers get to experience the key events that made the huge, battle-scared landscape of Jakku that is seen in Star Wars: The Force Awakens. Gamers that pre-ordered Star Wars: Battlefront can participate in the battle one week before others, starting on December 1st. All of the others will be able to get access on December 8th.

Star Wars: Battlefront lets fans and gamers live out a huge array of heroic moments and battle fantasies of their very own. You get to fire blaster guns, ride on speeder bikes and snow speeders, command AT-ATs, and so much more! The battles will happen on iconic planets such as Endor, Tatooine, and Hoth. You can play as memorable characters like Darth Vader and Boba Fett. The game has a wide array of modes that are tailored for different kinds of battles.