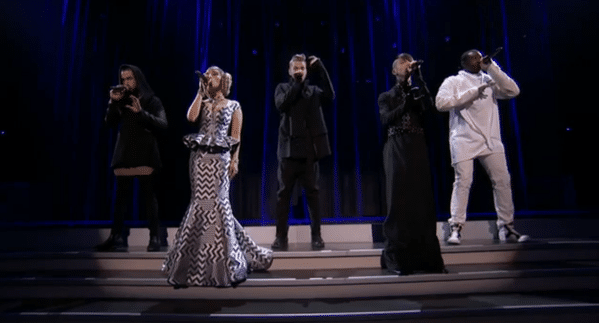 Last night everyone was talking about the American Music Awards (AMAs). I have to admit that I don’t really follow them. I know who all the performers are so I recognize them when I see the highlights scroll past my feed on social media but I don’t actually sit down and watch the AMAs. I’m just not that interested. I also don’t care what kind of face Nicki Minaj was making during the JLo performance. What I did find interesting was that there was a Star Wars performance at the AMAs. I can’t say I am surprised, really, with the mainstream popularity soaring due to The Force Awakens.

Pentatonix is an American a cappella group consisting of five vocalists originating from Arlington, Texas. They performed a tribute of the original Star Wars theme and we also got to see Harrison Ford himself. As for the performance, they were backed by John Williams and his full orchestra. We also saw a new clip from the movie that had not been shown before. It was a new spin on the Star Wars theme but what did fans think?

Not surprisingly, not everyone was a fan. One commenter said, “Thanks for Gleeing up my Star Wars. :/” Others outright said it was awful and criticized the AMAs and Pentatonix for trying to capitalize on the upcoming movie release and current popularity of Star Wars.

If you missed it, check it out below and let us know what you think: