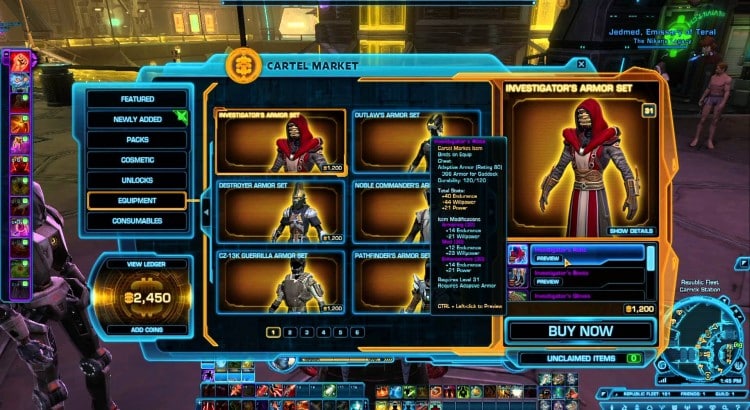 Hyperspace Beacon has a few things to say to BioWare. Actually, they have a bit of a bone to pick with the SWTOR team. And he’s not alone in this one. There are many people out there who agree, as the comment section will show and I have to say that while I am a fan of the game and have been since the beginning, he makes very valid points on this one. There are some seriously annoying flaws with Cartel Packs and while this isn’t the first time it’s been said, the points are presented rather well.

So what’s the beef? Well, here’s part of it:

“I am disappointed by the execution of the latest cartel packs on many, many levels. It was difficult enough for me to accept these lottery boxes in the first place. It concerns me that the best looking and most desired items in the game do not come from hard work and dedication, but rather how much extra money you’ve thrown at the game (though I do realize you can make cartel coins by inadvertently becoming a part of the sales team, aka the refer-a-friend program). I don’t begrudge the developers and publishers of online video games the desire to make money. After all, their families have to eat, too. However, my acceptance has been pushed beyond its limit by two items: the Grand Chance Cube and the Unstable Arbiter’s Lightsaber.””

He goes on to explain his opinions of the items that rocked the game, as well as why he is upset. In case you are not familiar with Larry Everett, he writes a column every other week about SWTOR and shares it as part of Hyperspace Beacon.

So what do you think about the topic? Want to see some changes made to the Cartel Market?