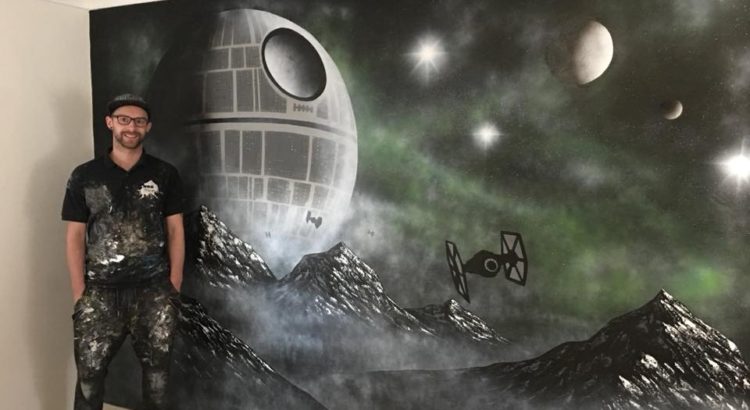 Karl Hewitt painted a Death Star mural for a huge Star Wars fan, and recorded the whole thing (posted in time lapse) for us to see. It’s really, really awesome. The 31-year-old mural artist from Clywd, UK, got what must be one of the coolest jobs ever – to paint a giant Death Star mural. His business, Noo Design Murals, has been at it for about four years. It’s a whole different ballgame from his previous job as a forklift driver. While he’s new to the painting business, his natural talent clearly shines through in his amazing work, and I suspect it will only get better and better with time. Here are some photos of the Star Wars mural from his Facebook page.

Hewitt markets his business from Facebook, and you can see more examples of his work there on his page. He does a lot of awesome stuff for kids, a football mural for one family, a portrait of Liverpool legend Steven Gerrard for a young fan, one Marilyn Monroe and Audrey Hepburn and a portrait of cheeky Lancastrian ukele player George Formby for a bar in Wigan. Of course, we’re so glad he posted pictures of this awesome mural project, but what’s even more amazing is that he recorded the entire thing. So you get to see more than just the end result – you can see the entire thing come to life in this timelapse video of his process. In total, it was more than 20 hours spread out over three days and as you will see for yourself, he is incredibly talented.

How awesome is that? I’d love for Karl to come paint my house!