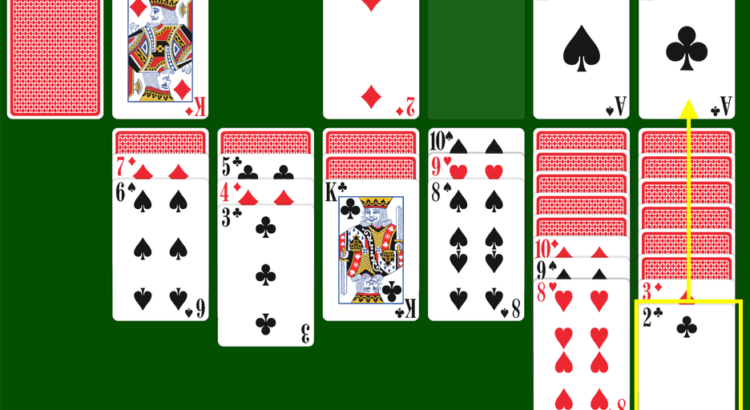 As the name implies, Solitaire is a game meant to be played alone (solo). It can be played with traditional playing cards, but once it was introduced to the computer, a whole new world was opened. This was a way for new computer users to help familiarize themselves with the motions of pointing, clicking, and moving things with the mouse.

The first objective or goal of solitaire is to release and play certain cards into position to build up each foundation. You want to “grow” the cards in sequence and in suit, from the ace to the king. Ultimately, your goal is to build the whole pack into the foundations and once you’ve matched all suits in sequence, the game is won.

Playing Solitaire from the Computer

When you play Solitaire on the computer, the cards will be automatically shuffled for you when you begin a new game. In some versions, you can choose to re-shuffle at the start, if you do not like the original flipped cards you’ve been given.

Once you’re ready to begin, you will create four organized piles of cards, one pile per each suit. So, to begin, you need to start building the layout. Using the cards you’ve been given, you will line up in sequence, cards in ascending order. If you have a 4, for example, you can place a 3 underneath it. However, you need to use the opposite color, unless you’re in the same suit.

Using that same example, you’d put a black 3 under a red 4. You can then place the remaining cards in a separate pile. On the computer version, this is done for you, off to the right side of your screen.

Now, what kinds of strategies can you follow if you want to win at this popular game? Let’s take a look:

And finally, if you’re playing timed solitaire, you need to move quickly. You have to make decisions on the spot and in quick manner, so as to get the best time. You should be fast with moving the cards in order to get a bigger bonus at the end. Knowing these strategies in advance can help you to move faster when you’re in the heat of it all.

As you can see, there is a lot to love about solitaire and more than one way to win. Learn more about it here if you want to practice for yourself and learn to play like a pro. Enjoy!