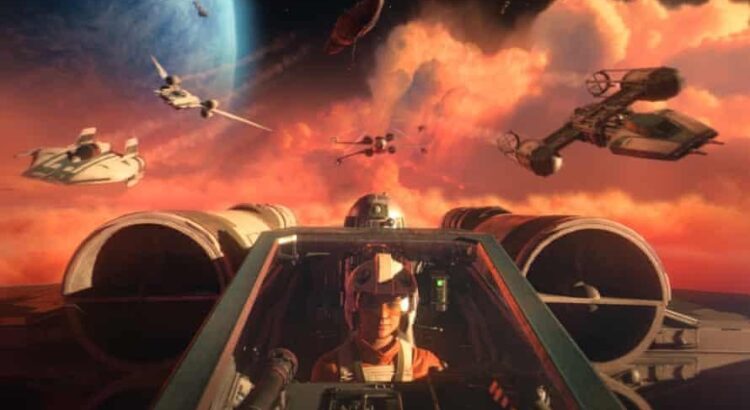 The esports landscape is loaded with several astonishingly good titles which means it can be tough to break through if you are new to the game. Of course, anything associated with the Star Wars series is not considered a neophyte by any stretch of the imagination but Star Wars Squadron gives gamers plenty of bang for their buck.

Star Wars fans with a penchant for playing video games will not want to miss out on this latest venture published by Electronic Arts and developed by Motive Studios for the Microsoft Windows, Xbox One, Xbox Series X/S, and PlayStation 4 platforms.

This is a truly immersive game that can be played in Virtual Reality on the PC or PlayStation 4, which provides an outrageously visceral experience from start to finish courtesy of the hands-on throttle-and-stick (HOTAS). It is a spaceflight simulation that leaves you in complete control in this 5v5 combat universe.

Ian Frazier, Creative Director of Motive Studios, stated, “As a lifelong Star Wars fan, it’s been an incredible journey to bring the space combat experience to life in a way that is true to the legacy of the franchise. It all starts in the cockpit, the center of the action. We’ve worked hand-in-hand with Lucasfilm to hone in on the pilot’s perspective and match the aesthetic from the films to create an authentic Star Wars gameplay experience that will transport fans into the pilot’s seat. We’re thrilled to bring this experience to players around the world, who can now join together in battles across the galaxy.”

The flight mechanics are breathtaking and the attention to aeronautical detail is sublime but what the game is lacking is more professional competition. There was a Twin Suns Tournament for Star Wars Squadrons in May but there has been little else since then.

However, that doesn’t mean all is lost because the game has enough panache to make its way on the betting menu at any of the premier online sportsbooks that carry esports. JustBet, one of the best online sportsbooks in the industry, often has odds on esports tournaments and it would be a captivating scene to watch some of the best spaceship pilots on the planet get down to dogfighting their way through a big-money competition.

And we are not the only ones talking about it because there are many who have played the game, fallen hard for it, and are tweeting about the opportunity that has yet to be fully seized.

@coltondigital tweeted, I feel like this could be a huge esports game – 5v5 dogfighting game – i don’t think there are any games in esports like this currently – it’s star wars

@GetSteinered also tweeted, Me: Sees a trailer for a competitive Star Wars game. Also me: Sees potential for a Disney-owned esports title, with ESPN already beginning to broadcast their own events… (hand on chin emoji)

It’s hard to argue with that logic and there is little doubt that there are millions who would agree with both of them. The latter brings up an interesting point in that Disney owns both the Star Wars franchise and ESPN. It seems to be an ideal symbiotic relationship to use Star Wars Squadrons as a launching pad into the esports tournaments realm. But the question is, does anyone at Disney share the same vision?

Speaking of which, it all depends on through which prism the bigwigs at Disney are looking at games like Star Wars Squadrons. Some of the suits at Disney may view it as just another outlet to keep the franchise thriving and at the forefront of mainstream culture. Below is one example of someone who could very well be fine with pushing the esports agenda but also has a broader perspective in mind when it comes to anything having to do with the SW franchise.

Douglas Reilly, Vice President of Lucasfilm Games, stated, “We are always looking to bring new Star Wars stories and experiences to our fans. Star Wars: Squadrons places players at the apex of one of the most uncertain times between the New Republic and Galactic Empire, where the scales of power could be tipped in either direction, and the fate of the galaxy is still unclear. We’re thrilled to give players the opportunity to play their Star Wars pilot fantasy and experience this original story.”

Unfortunately, that does not sound like someone intent on making SW Squadrons part of the esports tournament field. But ultimately, the gamers who gravitate to the game and become fans of it will tell the tale. If there is enough interest and plenty of dollar signs then we could see one of the best aerial combat games on the planet become an esports staple. May that force be with us.