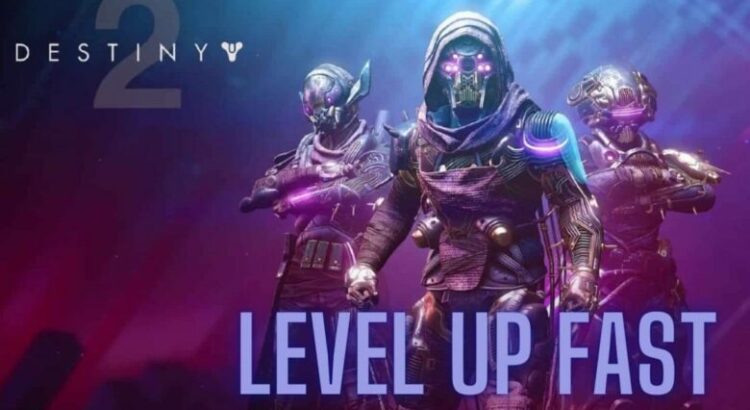 Being a good MMORPG (Massively Multiplayer Online Role-Playing Game) player usually means that you want to be a good player at every game that’s this type. Well, Destiny 2 is the type, and there’s a possibility to level up fast in it.

Now, it’s a little tricky because there have been so many expansions to Destiny 2 that the leveling system is quite comprehensive. So, we need to understand how leveling works, and which steps to take.

How Does Leveling Work in Destiny 2?

Destiny 2 is quite confusing when it comes to leveling, especially if you’ve played the previous instances of this game. There was a possibility to level up your character and level up your power based on the gear you had.

Now, it’s all based on gear, and that’s great but this means that you need to work twice as much to get to the desired level. The average of the stats of your gear is your power level. It’s your strength in terms of offense and defense.

The newest update offers a starting level of 1350. From there, you need to reach power level 1560. The levels in Destiny 2 are differentiated by three different caps. These are all milestones for you to go through:

Now that you understand how leveling works in Destiny 2, we can discuss what you need to do to go through those caps. Let’s do this step by step, and talk about which method is best or a combination of them that benefits you the most.

Basically, any activity you do will get you to the soft cap with level 1500. A good thing to do would be to finish all the campaign missions, and with this, you’ll get a chance to have gear above your power level.

Another thing to do for a fast level-up is to play the Crucible. Also, you can complete public events. A good tip is to simply go with the flow and avoid infusing gear because you’ll be getting a lot of it all the time.

Another great tip that can help you level up faster is creating characters that can share gear among them. The soft cap is quite easy to reach so you won’t have any difficulty doing it with different characters and it can be rather fast.

Now, we’ve gone through the easy part of the game, and you’ve reached the soft cap. Next, you need to reach the hard cap with the Powerful gear. There’s really no fast leveling here because the gameplay gets slow as in any MMORPG.

There’s no trick way to doing this, but you need to play the game in terms of completing the Crucible, Strikes, and other activities that can give you powerful gear. Also, you’ll get a faster level-up from bounties and the seasonal activities we mentioned.

Another tip to increase your gear level is to do a bit of gambling on Gambit. It’s going to be a bit more exhausting than the Crucible, but the rewards are great. Or, you can also join a clan and get Tier 2 rewards weekly by contributing to clan XP.

At the point when you reached 1550, there’s no need to think about Powerful gear because this won’t help your gear level. You need to master the Crucible to get great drops, and this means that you need to reach Legend Glory.

Getting Pinnacle drops is easy if you complete four matches a week on the Crucible. But, this is not the only way to get Pinnacle gear, think about the end game. The final components of most MMORPGs are the raids.

Think about where you can be with a full Witch Queen raid completed. At that point, there will be no stopping you, and you’ll have all the gear and power level you want. Finally, you can really start enjoying the game without thinking about what you need to do to level up.