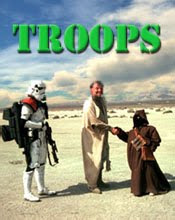 Troops is a mockumentary film by Kevin Rubio, which made its debut on the Internet in 1997. The film is a parody of COPS, set in the Star Wars universe. In the film, Imperial stormtroopers from the infamous Black Sheep Squadron patrolling the Dune Sea on the planet Tatooine run into some very familiar characters while being filmed for the hit Imperial TV show Troops.

The film jump-started the modern fan film movement, as it was one of the first short films to bring fan films into the digital age, taking advantage of internet distribution and affordable production and special effects equipment, as well as fans with movie-quality costumes.

Rubio finished the film while working at the Fox Kids Network, and was able to use well-known voice talent in his cast, including Jess Harnell, Cam Clarke, and announcer Bill Farmer.

The film has proven incredibly popular with Star Wars fans, and was awarded the inaugural Pioneer Award in the Lucasfilm-sponsored 2002 Official Star Wars Fan Film Awards.