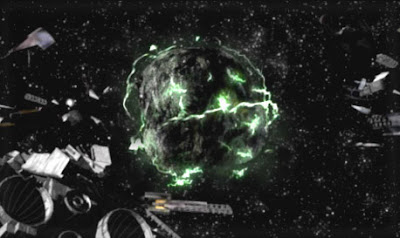 The Mass Shadow Generator  was a superweapon used in the Battle of Malachor V. It was created by the Zabrak tech specialist Bao-Dur, under orders from the Jedi Knight Revan, in the year 3,960 BBY. The weapon was the centerpiece of a trap with which Revan hoped to bring about a conclusive end to the Mandalorian Wars. Overseeing the device’s use was a Jedi General (later known as the Jedi Exile). Revan lured the Mandalorians to Malachor and a massive fleet battle ensued in orbit. During the fighting, his loyal general commanded Bao-Dur to activate the secret weapon with a single, silent nod. Moments later, a significant portion of both fleets were suddenly drawn from orbit into a vast gravity vortex that was powerful enough to crush the countless ships into the planet’s crust and fracture Malachor V to its very core.

In 3,951 BBY, the The Mass Shadow Generator was activated a second and final time. During her campaign against the Sith Triumvirate during the First Jedi Purge, the Jedi Exile traveled to Malachor V in pursuit of the Sith Lord Darth Traya. At the Trayus Academy, she fought the Sith forces occupying the planet and defeated both Darth Traya and Darth Sion in combat. Soon after, The Mass Shadow Generator was activated by Bao-Dur’s remote and the weapon destroyed what was left of the planet.

The Mass Shadow Generator utilized the unique gravitation fields of the Malachor system to destroy everything within close range of the planet Malachor V. Little is known about the precise inner workings of the device, but it is possible that the weapon acted as a giant inertial compensator, thus forming a sphere of intense gravity around Malachor V which crushed anything within range.

Alternatively, the field produced by an Immobilizer 418 Cruiser is referred to as a “Mass Shadow,” so this device may simply be a massive version of the Imperial Gravity Well Generator.