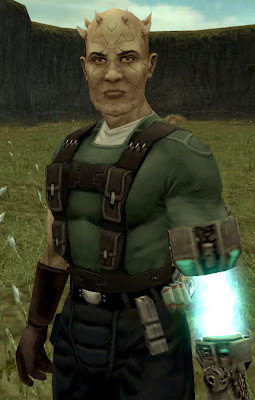 Bao-Dur was a Zabrak cyborg from Iridonia who served under the Jedi Exile during the Mandalorian Wars. He was a skilled inventor and was responsible for the design and construction of the Mass Shadow Generator. Years after the war he helped the Exile in stopping the echo in the Force caused by the Mass Shadow Generator. Wherever he went he was accompanied by a small, spherical remote which he built as a child.

Biography
During the war Bao-Dur was a technician who fought under the Jedi Exile; years after the conflict was over he still referred to the Exile as “General.” Bao-Dur was the inventor of many new weapons, shields and other accessories. One of these included a new mechanical arm able to replace the one he lost in the Battle of Malachor V. This new cybernetic appendage was incredibly strong, and made Bao-Dur a formidable opponent in a fight. The arm also had the power to destroy force fields and shields. But his most infamous weapon was the Mass Shadow Generator, which he designed and built after getting a Republic military commission as a Lieutenant. This weapon ended the Battle of Malachor V in the blink of an eye by completely obliterating the Mandalorian fleet and inadvertently killing many Republic soldiers and Jedi on his own side of the battle. This guilt haunted him a great deal throughout his life. The Exile (who later befriended Bao-Dur) gave the command, thereby killing almost everyone fighting in the battle above Malachor V and (as the Jedi Council perceived it) creating a massive wound in the Force which cast echoes throughout the Galaxy.

When Bao-Dur met the Jedi Exile again years later, he was working as a technician on the surface of Telos, a world that had been destroyed prior to the events of the Jedi Civil War. He was in charge of the shield system that cordoned off areas on the Telosian surface and provided protection for any animals introduced there. He worked there so that he might help to add back into the galaxy some of the life he took away at Malachor V. Bao-Dur hated Czerka Corporation, and generally wished to see kindness spread throughout the galaxy. He was an accomplished warrior, however, despite his pacifistic side and his long absence from combat. After traveling with the Exile for a while and gaining her trust, Bao-Dur agreed to be trained in the ways of the Force.

Atris and her Handmaidens generally thought highly of Bao-Dur’s skill with machinery and technology; in the words of Brianna, “his skill with machinery is something beyond what most can even aspire to.” She then went on to add that “his shield designs surpass even those of the best Echani power architects” – sublime praise coming from someone who was an Echani herself, and moreover a warrior.

Bao-Dur is the only companion of the Exile who did not have a clear prediction to his future. Not even Darth Traya could find out what happened to him.

Bao-Dur’s remote’s stand with G0-T0 on Malachor V was supposed to have been longer, with them being interupted by HK-47 and the new HK-51s. Depending on the aligment of the Exile, HK would either have G0-T0 destroy himself or he would blast the remote.

While referred to as “Bao-Dur” throughout most of the game, he is credited as “Bao Dur”, without the hyphen. This form also appears at some points in the game, mainly in rushed conversations like his hologram’s final order to the Remote.

On the voice test on LucasArts‘ Knights of the Old Republic II website, there is a line where Bao-Dur says “Make my sacrifice matter.” This has lead some players to believe that Bao-Dur was supposed to have died, whereas others believe it is just a reference to his lost arm.

Bao-Dur’s character class, Tech Specialist, did not appear in the first KotOR game and is unique to him in the sequel, although it does exist in the Star Wars Roleplaying Game. If the Exile chooses to train him in the ways of the Force, he becomes a Jedi Guardian.

If Bao-Dur is seduced by the dark side, he begins to display Sith tattoos similar to those of Darth Maul. He is the only character in the game whose fall is marked with the appearance of synthetic additions, as opposed to just physical decay.

On the cut material, no mention of Bao-Dur was made at all. It is highly speculated that he and Mandalore (although he can be seen with Visas on the Malachor surface loading screen) did not join the Exile on the trip to Malachor V since they were not mentioned to attack Kreia at the end of the game. It is rumored that he was to be killed on M4-78, since he only appears as a hologram on Malachor. It is also possible that Kreia’s inability to predict his fate was meant to leave room for his character to reappear along with the droids in a possible third installment in the series.