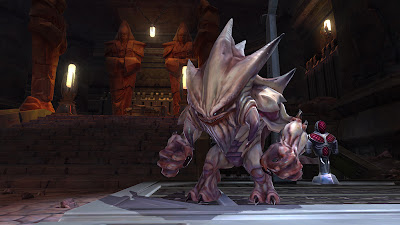 BioWare added five new entries to the “Inhabitants” section of the HoloNet; two creatures, a humanoid species, and two droids. Here is the official news:

Details on five new galactic inhabitants are now available on the HoloNet! Read up on the dangerous Terentatek and Vine Cat – you don’t want to go up against these creatures unprepared. Also, find information on the legacy of the red-skinned Sith Pureblood, descendants of the original Sith species. And don’t forget about the droids! You’ll find data about the M3-M1 Medical Droid and the S3-F5 Inclement Condition Probe.

The galaxy is full of fascinating occupants, so make sure to check the Inhabitants holorecords frequently for new updates!

If you haven’t browsed through the HoloNet yet, you should definitely check it out for all sorts of information on Star Wars: The old republic.