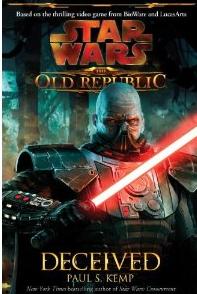 The first reviews of Paul S. Kemp’s upcomming book Star Wars: The Old Republic: Deceived is starting to show up on Amazon. It’s interesting that so many people already read the book considering the considering the release have been moved to March 22, 2011. One have to wonder if it has be planted or it is a real honest review. Anyways.

Anyways. Here it is:

First of all, let me say that my biggest peeve with Star Wars novels is that too many authors seem content to fill their books with ridiculous plot devices, endless battle scenes, and shallow characters. I’ve had enough of superweapons – after all, we all know the good guys defeat them. Unfortunately, I thought Sean Williams‘ Star Wars: The Old Republic: Fatal Alliance, the first in the Old Republic series, exemplifies these problems. As such, I admit I approached Star Wars: The Old Republic: Deceived with some trepidation.

Fortunately, Paul Kemp’s approach to the Star Wars universe is completely different. While technically the second book in the Old Republic Series, Star Wars: The Old Republic: Deceived features a new plot and new characters. WARNING: the rest of this review contains some minor spoilers, none of which as far as I’m aware are available elsewhere on the web – although I mention almost nothing past page 50 of the book.

Star Wars: The Old Republic: Deceived begins with the Sith sacking of the Jedi Temple on Coruscant, a scene featured in a Bioware trailer for the upcoming Old Republic computer game (I’ve posted the link in the comments section). By itself, this is a pretty dramatic opening for a novel and does a great job of bringing the action to life. The rest of the book focuses on how various characters cope with the destruction, and that’s where it gets interesting. The plot is actually fairly simple, but effective.

For the Sith, the book follows Darth Malgus – the creepy guy on the cover who led the attack on the Jedi Temple. He’s an evil villain to be sure, but also an emotionally complex one. He craves war and loathes peace, but also has a sense of honor and adversarial respect for the Jedi. Moreover, he cares for and loves his Twi’lek mistress Eleena – think an emotionally insecure Aayla Secura. I frankly can’t think of another Star Wars villain since Thrawn who had as much nuance and sheer destructive potential.

Next, the Jedi Aryn Leneer struggles with how to react to the death of her father figure, Jedi Master Zallow. Where most Jedi come across as implacably calm, which honestly can get a bit boring, Aryn really has to struggle through her emotions. She comes to doubt the Jedi prohibition on attachment and questions the sacrifices she’s made on behalf of the Order. She’s not simply a female version of Luke Skyalker – and she comes across as much more real and more interesting as a result.

Finally, there’s the smuggler character, Zeerid Korr. Except, unlike almost every other Star Wars novel, Zeerid isn’t simply a wanna-be replica of Han Solo. In fact, quite the opposite. While he’s good with a blaster, he doesn’t have the same world weary cynicism. He’s a caring father who was forced into the business by a family tragedy. He also has to make some difficult choices between earning money for his family and following his conscience.

Throughout Star Wars: The Old Republic: Deceived, each of these characters face unenviable choices and, to Kemp’s credit, they do not always take the obvious route. I could not predict the ending – itself rare for a Star Wars novel. In the last 20 pages, I actually gasped aloud at a certain turn of events. Without spoiling the ending, I think it’s fair to say we can look forward to a sequel.

I will provide a brief warning. While Star Wars: The Old Republic: Deceived does have plenty of lightsaber combat, these aren’t the focus of the book. Moreover, there really isn’t much starfighting at all. If you prefer Star Wars novels with constant action, then this book might not be for you. It’s a matter of preference. However, I suspect most readers will be pleasantly surprised at the direction of the Old Republic series and the character development in this story.