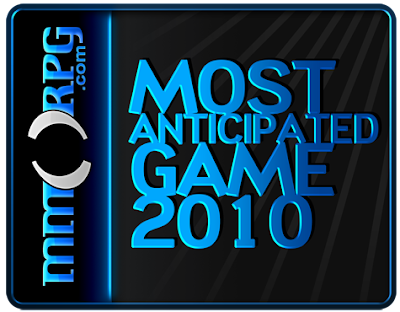 As the end of 2010 quickly approaches, it’s time for the annual Reader’s Choice awards over at MMORPG.com. Currently they are asking for your input as to what game(s) currently in development that you are most looking forward to playing. Check out the nominees and then cast your vote for Most 2010 Awards: Most Anticipated:

It’s that time of year again, as the holidays approach and our thoughts turn to snow and peace and love and what’s that other thing… right, gifts. Hey, it’s tradition and tradition is important.

Speaking of tradition, it’s time to kick off the voting for the annual MMORPG.com reader’s choice awards. You know the drill, we give you a bunch of nominees in our specially selected categories and you vote and in the name of good fun, argue about your choices until a winner is declared in early 2011.

This year, our categories are: Game of the Year, New Game of the Year, Most Innovative, Most Improved, Best F2P, Favorite Company, Biggest News Story, Most Anticipated, and the newest, and most dubious, addition to our prizes, Biggest Disappointment.

The rules are simple: For readers, all you have to do is look at the nominees and vote. One vote per person, and don’t go making extra accounts. We frown on that. For nominees: You may inform your community about your nomination, but may not otherwise unduly skew the voting by telling them who to vote for.

In order to qualify for this category, a game must be currently announced and carry a reasonable expectation that we will see a launch some time in 2011. The MMORPG.com staff deliberated at length and returned the following nominees:

There are many who ask whether or not Sony Online Entertainment might be coming a little bit late to the superhero genre party, with Cryptic’s Champions Online and Paragon Studios’ City of Heroes. SOE, for their part, promises something new and exciting in a more action-oriented approach to the MMO. NCSoft’s Guild Wars was almost universally seen as one of the top multiplayer RPGs of its time. The developers over at ArenaNet have decided to take it one step further in the game’s sequel, adding many full world MMO features that weren’t present in GW2’s predecessor including a very interesting dynamic content system. Rift, the game so nice, they named it… three times. The folks at Trion Worlds have been hard at work on this new MMO title that takes concepts of cooperation to whole new levels as creatures from other dimensions try to cross through rifts and enter the game world. If the players fail to defeat them, their power and influence over the world will grow. Born out of one of the most iconic RPG franchises in history, Bioware’s The Old Republic is still at the top of many players’ “must play” lists. Promising a story-based MMORPG experience that would include enough content for multiple sequels to the Knights of the old Republic franchise, the game’s developers have grabbed the attentions of media and players alike. Another action-based MMORPG, this one set in a fantasy world from the developers at En Masse Entertainment. With an art and design style meant to appeal to players in bother the East and the West and very strong demo showings at this past year’s trade shows, TERA is certainly a game to watch. So go vote for our favorite upcoming MMORPG now