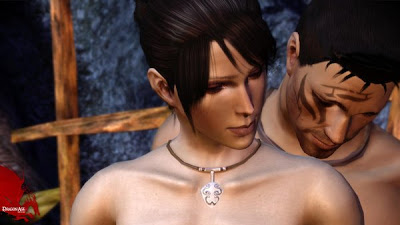 We tend to look at other upcomming Bioware games these days, as it gives a pinpointer to what we can expect of Star Wars: The old republic.

About a year ago the official SWTOR forums was on fire with a discussion about same sex interaction ( you know when role players makes out).

According to the ESRB:

Of course, it wouldn’t be a Bioware game without gay sex and sexy euphemisms – nor would it be Dragon Age without violence.

“Blood splatter effects occur when enemies are hit, and damage sometimes results in dismemberment or decapitation – blood stains and body parts occasionally appear in the environment. In one cutscene, a man’s severed head is held up then tossed to the ground.

We all know how Daniel Erickson is quite the ladies man, so who knows. Maby SWTOR might be… ehem… steamy…