An image was released from the beta forums that depicts a poll of advanced classes. It shows 575 voters at the time the screenshot was taken, asking gamers what advanced class they preferred playing the most.

Sith Sorcerer led with 13.39% of the votes followed by BH Mercenary with just over 10%. 6.43% of the responders said that they liked all the advanced classes they played evenly.
The BH Powertech got the least votes in the poll with only 2.26% and Smuggler Scoundrel was only slightly above that with 2.78% of the votes.
Of course this isn’t fully accurate of everyone who has played the classes because there were just under 600 votes. We also don’t know how many votes may have come in after the screenshot was taken. It’s still interesting and brings up good conversation about the advanced classes and which ones players will like the most.
Of all the Advanced Classes people played, which ones did they enjoy the most? The results are pretty interesting here and they even give those who have not played the game yet some good insight into the game. Have you had the chance to play any of the advanced classes yet? What are your thoughts on the favorite one?
Also, a new build for testers is coming out in the next few weeks, rumors are that it may be an RC. I guess we may have to wait and see… 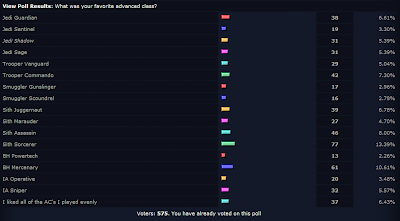