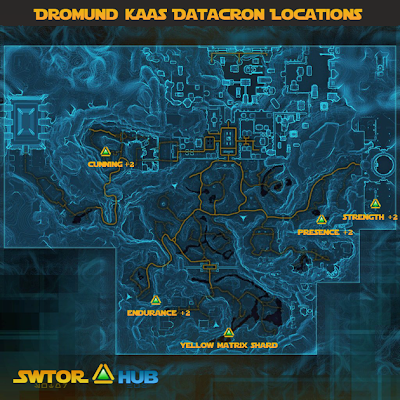 Dromund Kaas was the third planet in the Dromund system, a colony then the capital of the Old Sith Empire and later the lasting base of the Prophets of the Dark Side, whose Dark Force Temple contained such power in the the dark side of the Force that most weapons, excluding lightsabers, malfunctioned on the planet’s surface. The site of a major battle during the New Sith Wars under Kaan’s Brotherhood of Darkness, for millennia the planet’s location was known only to a few, very select Sith Lords, falling almost completely out of the public eye.

Read all about Dromund Kaas here, and check out the datacron locations below:


18 – [Yellow Matrix Shard] X: -187 Y: 738 Z: -110 This datacron requires a trek through the Heroic area south of the WALL Warp point. Cross the inital bridge from the wall and run straight ahead and follow the first wall to the left. Keep following the wall and you will see the datacron up on a ledge above a waterfall. Keep following the wall to the east and hug it. You’ll eventually go semi off the map, but just keep hugging this wall and you will come out at the datacron.

19 – [Strength +2] X: 865 Y: 642 Z: 7+ This one is in the main spaceport where you arrive on Dromund Kaas. Go south from the main area of the Spaceport to get to Docking Bay D-61 via the elevator. The datacron is atop a stack of shipping containers.

You can’t reach it from the ground, so you have to walk about halfway up the ramp in the room until you see a stack of crates on your right. Next to it is a small gap that you can fall into to land on a beam that is hanging. Keep walking across the beam to the containers the datacron is on, and jump on them when you get to the end.

20 – [Endurance +2] X: -793 Y: 1450 In Lord Grathan’s Estate there is a small pond just north of the westernmost building. A small mountain path north of the eastern tip of the pond leads to the top of datacron’s ledge

21 – [Presence +2]X: 580 Y:798 Z:115 After exiting the spaceport, head up the hill to the left. At the top of the hill is a cave in the mountains. Continue through the cave and then follow the path onwards. The datacron will be there in plain view.

22 – [Cunning +2] X: -1219 Y:212 In Dark Temple Approach, Kaas City Expansion District. To reach the datacron, you must jump on the stack of boxes and crate near the tents above the canyon containing the datacron. From here, you hop over the fence, run down the path and jump off toward the larger plateau. From this plateau, you can drop onto the pillar holding up the datacron.