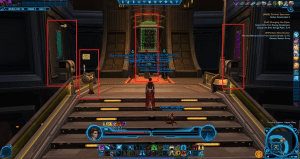 So the VIP lounge is where all the cool kids hang out? While BioWare may have had good intentions with creating the VIP areas, there was sadly not much point in going there. Everything that you needed for your character was found in other zones and areas so unless you were RPing or just goofing off, there wasn’t much point in hitting those VIP areas. But the new game update has changed that.

Want access to a mailbox without a bunch of commoners hanging around it? Want a new place to get to your cargo hold or to use the GTN without a whole crowd around? Well, if you’re a VIP, you’re in luck.

BioWare has now decided to make the VIP areas matter for something other than just hanging out or feeling special.

Now the VIP areas also have the Galactic Trade Network terminals, mailboxes and Cargo. This could be a smart move for BioWare. It’s a very small thing but as we’ve mentioned before here, those small things sometimes make a big difference to gamers.

If you’re a VIPer, do you think these upgrades are a positive?

If you’re not, would this be enough to make you want to become a VIPer?