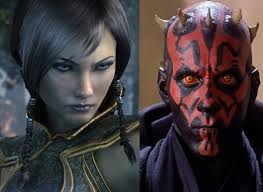 Satele Shan vs. Darth Maul – Here’s another versus matchup video we think you might enjoy. Who do you see the victor in this showdown? If you ask me, I say Satele has it by a long shot but it could be just because I am such a fan. This is not to known on Darth Maul. He was an amazing duelist. In fact, were it not for Satele’s ability with The Force, she could easily finish him off.

Some will argue that since Shan is a grandmaster, this isn’t even a fight and she would take it by a landslide. However, Maul was very powerful and skilled with the sabers and I still believe would put up a good fight in a versus battle such as this.

A lot of it also comes down to timing, and where in their story each is when they are pitted against one another. Each had their own journeys and growth to experience and this could affect how they match up against one another. So it’s important to also look at story and timing if you’re going to pit these two together in a face-off.

Check out the video for yourself:

What do you think? Who would have your vote for the win?