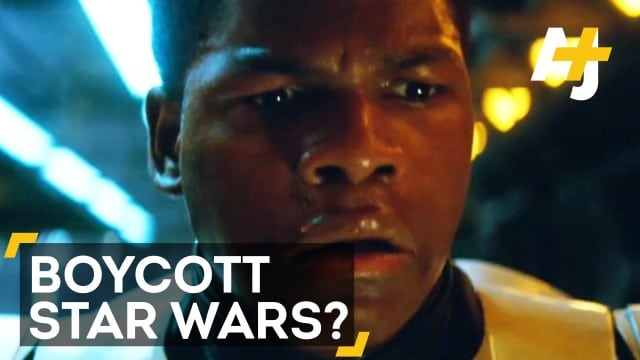 Last night the trailer was released for Star Wars VII. It’s no surprise that people everywhere were talking about it. On Monday afternoon, the hashtag #BoycottStarWarsVII shot to the top of Twitter’s trending topics and if that one left you wondering, you might find this little story interesting (or infuriating). Or both.

The people behind #BoycottStarWarsVII say the new movie is “promoting white genocide” and the so-called “movement” is asking others to boycott the movie. They also call Abrams a white-hating Jew.

“#BoycottStarWarsVII because it is anti-white propaganda promoting #whitegenocide,” says one Tweet:

#BoycottStarWarsVII because it is anti-white propaganda promoting #whitegenocide.

There was also a Twitter account named after the hashtag set up to spread the hate. We’re not even going to bother linking it here but it’s not difficult to find. So what is this so-called “movement” all about?

Vox summed it up quite nicely in this post:

Specifically, the #BoycottStarWarsVII “movement” (and I’m skeptical of calling it that, for reasons I’ll get into shortly) takes umbrage with the fact that The Force Awakens’ cast features not one, but multiple people of color, a situation a small but vocal minority sees as evidence of a “white genocide” in the Star Wars universe, perpetuated by Abrams, a white-hating Hollywood Jew. Yes, it’s ridiculous and disgusting on many, many levels.

But Genevieve at Vox goes on to make another very good point: the hashtag is only trending because of people on Twitter commenting AGAINST it. There are very few posts at all in support of the “movement” and those we can find do appear to be linked to one another. So while there may be a handful of racists out there using the hashtag to perpetuate hate, it really all began with a couple of trolls/racists creating the accounts/tweets and sharing them a lot.

It began on Sunday night with a handful of “haters” using the hashtag to spread around some ignorant and hateful comments.

This very ugly Storify gives you the timeline of how it all began. From there, it spread like wildfire as others who were following the Star Wars VII news asked “What is this hashtag all about anyway?” Proving yet again that not everything that goes viral is a good thing.

Once you get a hashtag on Twitter’s trending page, it really can take on a life of its own from there.

At the end of the day, it looks like this was really just a couple of trolls looking to agitate the masses. And they succeeded. Still, with racial tensions high like they are in the United States at this time, it’s easy to see how this is a topic that could spiral out of control easily and quickly.