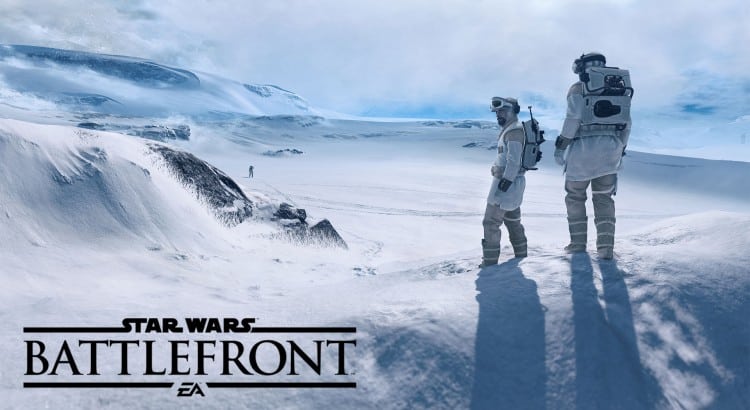 EA is continuing to tell gamers that the DLC information will be coming in the near future, but they will not tell us exactly when. While the DLC information is being kept on the down low for now, EA has confirmed that a brand new update for Star Wars: Battlefront will be arriving and have fans and gamers hugely excited. There are not many details as of now but this roundup is going to help fill you in on everything you should know right now.

In 2015, DICE and EA stated their first Star Wars: Battlefront community wide event. The event began during the holidays and then ended on January 6th of this year. The two companies asked for gamers across all three platforms to add up to 500,000 hours of game time playing as Han Solo and Luke Skywalker.

This week, EA stated that gamers had been quite successful and squashed the 500,000 hours. Between the start and finish dates, gamers accumulated 1.2 million hours playing as Han Solo and Luke Skywalker. EA and DICE did not say what the reward would be, but since their latest announcement, we have an idea.

So, EA and DICE have told gamers that they have earned rewards for meeting their expectations and they will be coming in a January Star Wars: Battlefront update. We don’t know what the exact contents of the reward are, but gamers can expect a “special reward that directly ties to Han Solo and Luke Skywalker.” The company stated that the exact details will not be revealed until the January update comes out for the PS4, Xbox One, and PC.

EA has told gamers that they “will want to look to Hoth to show the fruits of your labor” so it’s easy to assume that this reward will be tied in with Hoth.

When Will It Be Released?

It will be released in January since EA is calling it a January update. While we have an idea to a window of time, nobody knows the exact release date. However, we do know where to find one. EA seemed to have gotten into a habit of announcing Star Wars: Battlefront details before the time it’s supposed to be released through their forums. The company decided to dedicate an entire section to upcoming updates. The forum and the company’s Twitter are the first place to look for details about the release and the change logs.

Nothing yet has been confirmed but we will be surprised if the January Star Wars: Battlefront update came out without any bug fixes. EA and DICE have a certain amount of problems with the game but there are still other issues with the PC, PS4, and Xbox One versions.

Both EA and DICE have acknowledged a few of these issues and they are trying to keep a list of bugs and any other problems they may have. Among these issues, the widespread white pixel glitches and CE-34787-0 seem to be crashing on the PS4. The company has confirmed which one of the problems that we be fixed on the January update but it would be shocking if the log didn’t include the major issues.

How to Fix Battlefront Problems

We decided to put together a list of sorts to help fix some of the most common Star Wars: Battlefront problems for the PS4, PC, and Xbox One, while we all wait. This is a wonderful place to start if you come across any problem on the current version of the game.

The very first thing for you to expect is a Star Wars: Battlefront DLC announcement during the beginning of the year while DICE and EA start expanding the game on all three platforms. Both EA and DICE have confirmed certain plans to release four paid expansion packs for the PC, PS4, and Xbox One. There are no individual prices as of yet or any specific release dates, but it seems that we shall see an announcement soon enough.

One DICE employee hinted at this announcement. Still nothing is official yet, it does fall in line with EA’s confirmed DLC release window. The first Battlefront DLC should come out during the early part of 2016. Even more recently, the company told one gamer that he would not have to wait very much longer for the details about the Star Wars: Battlefront DLC, so we definitely expect something in the very near future.

EA and DICE have not given out any specifics but we know that the expansion packs will mainly be focused on adding new heroes and villains, new maps and map types, new Star Cards, and much more. The first DLC pack will give us some insight about what we can expect with the other three.

Rumors started going around thanks a sighting of Chewbacca in the game, but nothing has been confirmed as of yet. Because DICE and EA are focused on the original trilogy, it would be shocking if Chewy, Yoda and some of the other popular characters were not in the upcoming DLC.

We encourage you to keep your eyes peeled for an announcement and if you picked up the Season Pass, you will be getting the expansions two weeks before everyone else does.