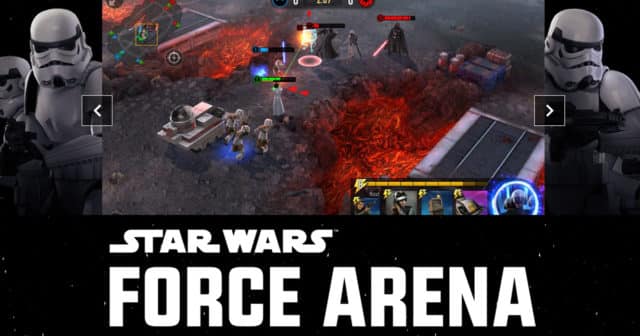 The New Year is here and with it, we get a new Star Wars game. This one’s looking to be fun. “Star Wars: Force Arena” is a mobile strategy game under development by South Korea’s Netmarble Games. The leading development studio and subsidiary Netmarble Monster, best known as the creator of the globally famous mobile role-playing game “Marvel: Future Fight” wants to bring in Star Wars fans in addition to mobile game enthusiasts with this hot new title.

The game is supposed to be launching in 154 countries in 2017, including the US, Japan, and China in 2017 but we don’t yet know the exact launch dates. You’ll have to stay tuned if you want to find out when it’s available in your country. So what is this new Star wars game all about?

As we said, it’s a mobile strategy game. You get to choose from 1v1 or 2v2 tournaments that last three minutes each. You can choose a leader from well-known characters like Luke Skywalker, Princess Leia, and Darth Vader. In total, there are more than 60 characters you can choose from. It’s designed to be an easy to play game, even if you’re new to gaming. It’s intended to allow players of all ages and backgrounds to enjoy a taste of Star Wars on the go. They stick with the original plot and storyline that you know the characters in as much as possible, so it feels like you’re in the movies, playing your favorite characters as you watched them on the big screen.

Only time will tell how big this game will be and what Force Arena will offer in terms of replayability. Will it be as long-term addictive as some mobile games? Netmarble has stated they would consider hosting an eSports tournament for the game in the future, after it has time to gain more traction in the global market.