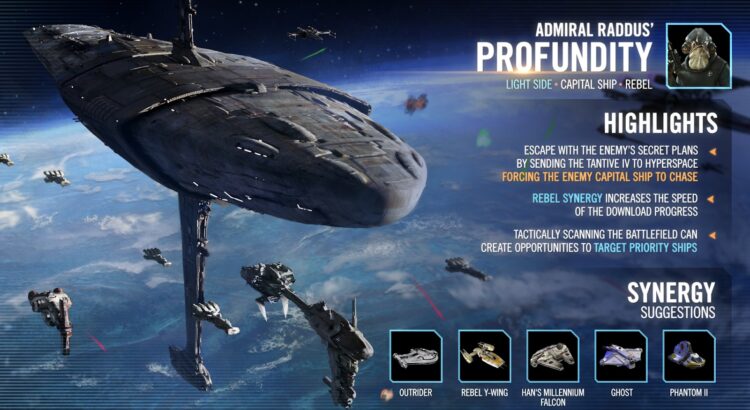 The guys over at Capital Games has just announced Profundity. Take a look at Admiral Raddus’s pride and joy.

FAQ:
Where is Profundity intended to sit within the Meta?
We worked very hard to engineer a ship that can beat a defending Executor of equal investment. In the flip situation, with that same Executor attacking a defending Profundity, the battle should fall in the Executor’s favor.
Why is Admiral Raddus required at such a high Relic level?
In order to give the Profundity a good initial impression, we wanted to ensure that the crew of the ship would be on par with the Relic 9 Admiral Pietts that are on a good chunk of Executors out there.

ABILITIES:
BASIC: No Turning Back Now

Final Text: If this ability is used during Profundity’s turn, deal Physical damage to target enemy and grant target ally a bonus turn. If target ally is a Rebel, they gain 50% Offense, increase Download by 10%, can ignore Taunt, and inflict Buff Immunity on their target for 1 turn on their next turn. If the enemy already had Buff Immunity, Stun them for 2 turns, which can’t be evaded or resisted.

If Profundity was called to assist out of its turn, deal Physical damage and instead inflict Daze for 1 turn which can’t be resisted.

Final Text: Increase Download by 10%. Dispel all debuffs from target ally and they assist twice.

At the end of the turn, target enemy is inflicted with debuffs for each instance of Physical or Special damage they receive during this turn for 2 turns, which can’t be resisted:

UNIQUE: I Say We Fight

At the start of battle, Profundity gains 10 Speed for each Dark Side enemy (including the Capital Ship) until the end of its first turn and ally Rebel Cargo Ships gain 4 stacks of Reinforced Hull, and ally Crewless Rebel Tanks Taunt for 1 turn. Ally Rebel ships gain the following benefits based on their role:

Ultimate – Admiral, We Have the Plans (Requires 100% Download Progress)

Final Text: Limit one use per battle. Remove the enemy Capital Ship. Dispel all buffs on all enemies. All enemies are inflicted with Speed Down for 2 turns and Stranded for the rest of the encounter, which can’t be copied or dispelled. The Profundity gains the Plans Acquired Special ability. Rebel allies gain Damage Immunity for 1 turn and recover 100% Health and Protection. This ability can’t be evaded or resisted and requires 100% Download progress to activate.

Stranded: Take damage equal to 35% of its Max Health at start of its turn; this damage can’t defeat a ship; can’t recover Health or Protection, or gain Protection Up

Plans Acquired: All allies gain Advantage, Critical Damage Up, Defense Penetration, and Offense Up for 2 turns. This ability starts on cooldown (Cooldown: 4)

Final Text: All allies gain Advantage, Critical Damage Up, Defense Penetration, and Offense Up for 2 turns. This ability starts on cooldown.