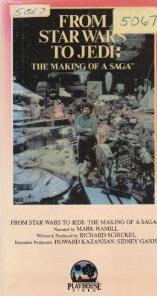 FROM STAR WARS TO JEDI: THE MAKING OF A SAGA is exactly what the title implies, a behind-the-scenes look at the creative process that brought us the original trilogy of Star Wars, Empire Strikes Back, and Return of the Jedi. Many fascinating facts are revealed. Did you know that Jaba the Hut cost over $100,000 to make and most likely is the biggest puppet in movie history? Two men were required to be inside the puppet to operate Jaba. Did you know that the Ewoks were modelled after Chewbaca, but Lucas went to the opposite extremes in their appearances? Instead of very tall, he made them very short. Instead of long fur, he gave them short hair. Further insight into the story of the saga is revealed, and never-before-seen out-takes of actors are shown. Mark Hamill (“Luke”) narrates.

This video is 65 minutes in length, and it will be of interest to any fan of the original trilogy, and perhaps even fans of the new trilogy (Episodes I – III).

The Making of a Saga”, it is a necessary part of any Star Wars collection. The deleted scene of Jabba and his henchmen in Dockingbay 94, an extensive view of a behind-the-scenes look at Return of the Jedi and also at ILM, this video gives the viewer a rarely seen view of the magic that makes our favorite films come to life.