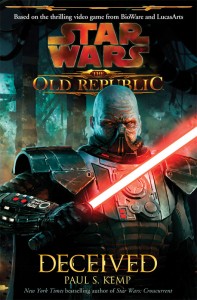 A few days back Del Rey hosted a Facebook chat with Deceived Author Paul S. Kemp ( view the transcript here ). Kemp is the author of the recently released Star Wars: The Old Republic: Deceived novel witch debuted in the lucky thirteen spot on the New York Times bestseller list witch is quite an achievement. The book is set in set in The Old Republic timeline and tells the tale of the notorious Darth Malgus.

No major news was announced in the chat, but it did give fans a chance to ask away about things related to Deceived and the chat was unfortunately cut short by FB technical problems. Here is a run down: