Billions of people now use Twitter – sadly, most of them just to massage their own egos and pointlessly try and collect as many followers as possible without using their influence for any good or even for entertainment value, but look hard enough and there are some ripe choices in amongst there. And it seems that the Star Wars universe is as well represented in the land of tweets as the real world is, with an impressive array of characters from every time-period of the many-faceted franchise. 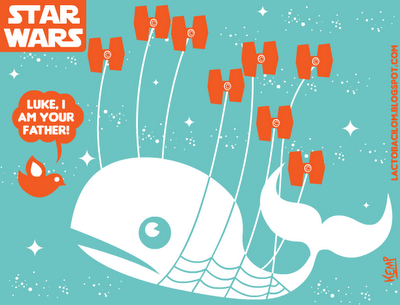 A lot of those characters are humorous versions of those we see on screen, and it is my aim to introduce you lot to the cream of the crop of these fictional but very real Twitterers.
So, to start with – Series One if you like – are a handful of malignant foes, either fully paid-up members of the Empire or at the very least associated with Darth’s gang. Follow them, and enjoy the humour…

It’s all fun and games until someone loses his hands, both legs, all his hair & is horribly burnt by molten lava.

Careful my young subject. It is not well to ask such dark questions. The matter of my “bed” is not for discussion.

Parenting Tip: Have to tell your kid something bad? Cut off their hand first. It’ll make your news seem not that big of a deal! #StarWars

I’m competing on Dancing With the Stars next season. Vote for me or die.

You can actually get a decent wireless connection in the stomach of the Sarlacc. Not that I’m sure that I’m in the stomach. Boy I like Firefox’s spellcheck

When I grow up I want to be a desk jockey for the Empire. #starwars

If there’s one thing I’ve learned in my years as a gigolo, it’s that octogenarians aren’t fussy.

I was supposed to be the monster in #CLOVERFIELD