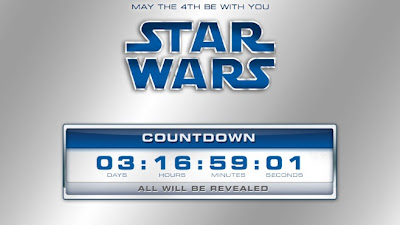 Proving that there’s somebody out there that can generate worse puns than me, Lucasfilm sent an e-mail message out over the weekend hinting that all the details of the Star Wars saga Blu-ray sets will be revealed on May fourth. The e-mail points to the “May the 4th Be With You – Star Wars Countdown page” on StarWars.com.

Underneath the timer is the simple phrase “All Will Be Revealed.” To spare you the math, the exact day and time for the reveal is Wednesday, May 4 at 9am EST/6am PST.

Thus far all we know about the Star Wars: The Complete Saga on Blu-ray is all six films will be available in a single box set as well as the prequel and original trilogies in their own box sets. LucasFilm has also confirmed that all-new deleted scenes will be included and previewed one featuring Luke at the beginning of Return of the Jedi last summer.

This reveal should fill in all the blanks and offer a complete look at the bonus features as well as the finalized packaging designs for all three sets.