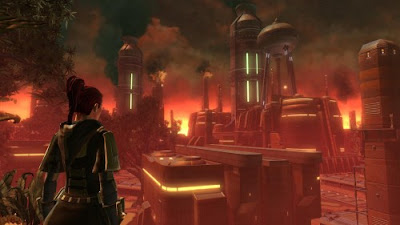 What’s that? A negative review for SWTOR?
That’s right; you read it correctly. Who would dare such a thing? Bit-Tech has something to say about our beloved SWTOR.
We’re all anxiously awaiting the game that promises to “keep players engaged” for hours on end. However, according to Bit-Tech, this may not be the case. In fact, they give SWTOR a negative preview and express disappointment in the game after forty-eight hours of solid play.
You have to take notice with comments like “It’s plain and staid and deathly dull” and “it’s one of the most boring titles we’ve ever had to endure”. This is just two of the negative things that Bit-Tech had to say about Bioware’s new brainchild.
It seems that one of the things that Bit-Tech believes makes it so bad is the fact that Bioware makes so many promises about how they have “infused a series of deep, immersive, epic stories” into this game and how this makes it a step above the rest.
When it comes to the combat scenes this is what Bit-Tech had to say “Even fierce combat feels painfully static and uninvolving”. However, they added that playing a melee or cover class was more interesting because they were the two classes they found that “required more than just standing still and shooting non-stop”.
However, Bit-Tech states that what they found to be the most disappointing was “how empty and lacking in personality the worlds of The Old Republic felt”. This is not something that you want to hear about a game that promises fun and excitement like you’ve never seen before.
Nevertheless, Bit-Tech does point out that the game is not complete at this time, which would ultimately make the worlds appear less populated than they should be. They also agree that the game does have some good, interesting gameplay; it just doesn’t “stand out” the way Biowave promises.
I don’t know… maybe Bit-Tech are just looking to make a name for themselves by giving a negative review. What do you think?