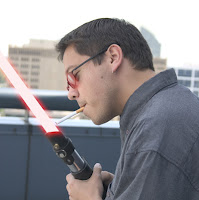 We previously brought you a story about how lightsabers work but when it comes to filmmaking history, you probably have no idea how far the light saber has really evolved. It’s really interesting to look at the birth of the lightsaber and how it evolved into what we know it as today.

In this article by Rianne Hill Soriana, we see an explanation of the lightsaber concept:
“According to filmmaker George Lucas, “Star Wars” had influences from early pirate, adventure, and romantic films of the 1940s. With its basic premise centering on a romantic fantasy, it was inspired by the great romantic traditions in the mythology of “King Arthur” and the adventurous spirit of “Robin Hood.””
She goes on to describe the look of the lightsaber itself and how this look was pulled off in film technology, even many years ago, helping to create the legend that is Star Wars today. And who can forget the sound of the lightsaber? The sound it made was just as important to the lightsaber as its look.
“The lightsaber sound effect originated from the hum of idling interlock motors in old movie projectors. This was combined with the interference coming from a TV set on an unshielded microphone.”
Today, the lightsaber has become synonymous with Star Wars stories and the movie rendition of it made it that much more real in the minds of fans everywhere. Even those who are not self-professed lovers of Star Wars will think of the legendary lightsaber when they hear the words “Star Wars”.
Many games have been created over the years to try to put the power of the lightsaber into your own hands. While many were interesting, none could completely capture what it’s like to power your very own lightsaber with “The Force”.
When you think of the lightsaber, what memories does it conjure for you?