More news on upcoming Star Wars TV projects, as producer and long-term George Lucas collaborator Rick McCallum has given up some details to Czech Position about the long-awaited and hotly-anticipated live-action TV series. 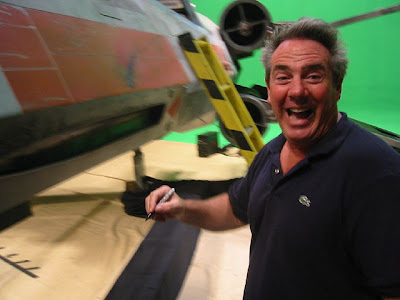 First up McCallum said that the show is likely to be shot at least in part in the Czech Republic, following on from “The Young Indiana Jones Chronicles” TV series, which was also partly shot in Prague and the upcoming Red Tails, which was mostly shot in the Czech Republic with a local crew.
He then got into some more exciting territory, giving a little more info on the expected ETA for the project:

The TV series is on hold, but that has nothing to do with the Czech Republic; it has to do with [the episodes being] so ambitious. We have 50 hours of third-draft scripts, but the problem we have is there is a lot of digital animation; we don’t have the technology yet to be able to do them at a price that is safe for television. Since we would be financing them, it would be suicide for us to do this [now]. So we are going to wait three or four years.

However, the pragmatic producer did go on to admit that the current state of American TV might throw a spanner into the works:

Network television and cable television as we know it are completely imploding, so we’re not really sure that in five years’ time we can release a dramatic one-hour episode because it is all reality TV now.

Hopefully, we’re only talking worst case scenario here, because if anything needs to be green-lit and fast-tracked for TV it’s this project.

Best of all, McCallum also offered the following plot hints:

It takes place between episodes three and four, when Luke Skywalker was growing up as a teenager, but it has nothing to do with Luke… Basically, it is like ‘The Godfather’; it’s the Empire slowly building up its power base around the galaxy, what happens in Coruscant, which is the major capital, and it’s [about] a group of underground bosses who live there and control drugs, prostitution.

The Godfather meets Star Wars?! Now that is something I can get on board with. Very exciting stuff, if you ignore that slightly pessimistic blip in the middle there…

…But still, maybe five more years to wait?! I thought we were supposed to be getting this show in 2009? I know it’s supposed to be set in the future, but I’d quite like to see it before the future actually bloody arrives!