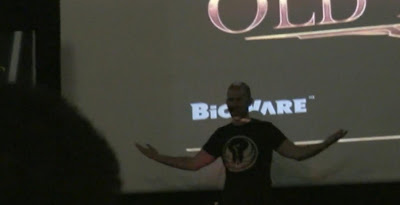 The French guild Chimaera uploaded a video with Daniel Erickson from his French community visit last week. Here’s the recap for you:

Daniel Erickson walked onto the stage with two Storm Troopers (fun!) to talk about Star Wars the Old Republic. He started by listing off many achievements they have reached with this game including one of the Guinness Book of World Records for “Biggest Voiceover Production” in entertainment history.

With accomplishments like that, there’s no wonder why so many fans are amped up for this game’s release in December. The release date for Europe is December 22, 2011.

Erickson was quoted as saying “The biggest story RPG in history”, which gives me a lot of hope for the depth of the lore that we will find when we boot up our computers and run Star Wars: The Old Republic for the first time, and hopefully every time thereafter. In a game like this, story is everything and they are making some big promises!

After giving his introduction about the game and its release, Erickson went on to explain the rules of Huttball. While it sounds complicated with his description of “Mario Brothers Style Timing”, I, for one, am completely intrigued by the concept and cannot wait to give it a try. I’ll be sure to keep his tips in mind as I play such as “do not try to throw the ball when you are almost dead; you won’t have time”.

With a smile and complete interest, Daniel Erickson went on to answer questions by the audience in a successful attempt at helping the crowd better understand what to expect from the game. The question and answer portion is most of the interview but he does offer some very good information that everyone will want to hear. It’s worth checking it out!