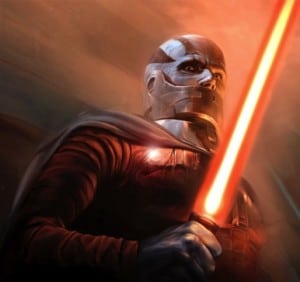 According to an article that appeared on IO9.com, Star Wars Episode VII villains may have just been revealed. Even though the website quotes other sources, we couldn’t help notice the similarity of the rumored villains with some of the elements we see from SWToR. Needless to say, these rumors have not been confirmed so they should be taken with a grain of salt.

IO9 quotes “Latino review” in stating that the main villains of the upcoming Star Wars movie are the Sith Inquisitors who are the defenders of the Sith Order. The movie will tie Darth Vader with the Inquisitors and highlight their relationship to the former. Obviously, the Sith Inquisitor is a very familiar figure in the SWToR universe with a very interesting story line.

Another similarity with the original Knights of The Old Republic (KoToR) game is the villain’s description that Io9 retrieved from “Indie Revolver”. According to the latter:

He’s tall and thin and terrifyingly creepy, with glowing red eyes to match his red lightsaber. He’s got some robotic upgrades, like Vader – but no mask. The cybernetic bits weave in and out of him. He’s got a human upper lip, a steel jaw…

A steel jaw and a human upper lip, certainly brings us memories of Darth Malak as he appeared in  KoToR and maybe to a lesser extent to Darth Malgus from SWToR. If we circle back to Lisa Mason’s article from June about the future of SWToR, then maybe (just maybe), there is some basis for the rumored tie-in of SWToR with Episode VII canon.

As mentioned in the beginning of this article, nothing has been confirmed by an official source so whether these rumors are true or not remains to be seen …they sure sound exciting though!