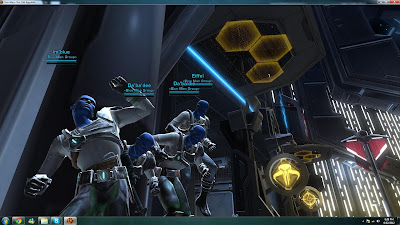 It’s time for the Community Q&A again and this week, some really interested questions were asked and answered by official staff of BioWare. It’s all laid out on the community blog but here’s a snippet of the questions:

Chyp: Can we expect to see any animation/damage timing consistency changes between factions?
Georg Zoeller (Principal Lead Combat Designer): Yes. The animation team has been working on a new set of animations for abilities like the Trooper’s Mortar Volley to provide closer matching of animation timings and improved combat responsiveness. We expect to roll these changes out with Game Update 1.2.
Zennis: Has there been any discussion to streamlining the Space Port process? Perhaps allowing speeders in the Space Ports besides the Fleet?
Brian Audette (Senior Designer): We’ve absolutely heard what the fans are saying and have been exploring options to address these issues. While we are still investigating allowing speeder use in Space Ports, we’ve also been looking for other ways to get people from point A to point B with greater haste. One such feature will specifically affect planets that have Orbital Stations instead of Space Ports such as: Tython, Korriban, Hoth, and Belsavis. We’ll be adding an option for players to go directly to their ships from the surface shuttles as opposed to having them run through the Orbital Station to their airlocks. This feature and some additional tweaks will start showing up in Game Update 1.2.
deusBAAL: Will you be providing a LFG tool? What will be its features? How will it be intended to work and when can we expect it to go live?
Daniel Erickson (Lead Writer): We are hard at work on a much more robust LFG functionality that will quickly help put groups together while still offering the flexibility to decide how you group and what sort of people you want to be grouped with. We’ll release more details as we get closer to release.
If you want to discuss the questions from this session, here’s the official Forum thread. Remember to keep to the rules or you’ll get the mighty ban-hammer.
And don’t forget that now is your time to ask questions for next week. They have now opened an official thread for next week’s Q&A, which will stay open until 2pm CST on February 28th (8pm GMT/9pm CET) so get those questions in there.