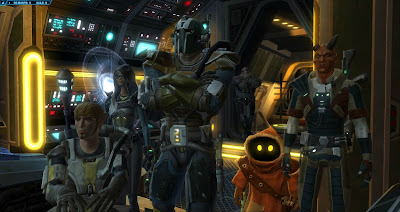 Once again, we see SWTOR in a big news source. CBS News has a review of the game in their TechTalk section. Their piece titled “Star Wars: The Old Republic puts the role-playing back in the MMORPG” tell us just that- how they feel BioWare put the role-playing aspect back into MMORPGs. This is a good point to make about the game. The story is the biggest selling point of this game and it’s the one thing that stands out and separates the game from other MMOs.

They tell us:
The Old Republic brings these staples of any good BioWare game and throws them into the culture of massively multiplayer online role-playing games (MMORPG). The result is something that feels markedly different than anything other MMORPGs have to offer, while never straying too far from the established formula.

This review is less of a review in the traditional sense and more of an overview/explanation of what the game is really about. They talk about racial options, story presentation, and more. The review doesn’t really tell us anything that seasoned SWTOR vets don’t already know but it sure is a great way to get the attention of the general population who is not already playing the game.

Someone who is just reading the daily news might see this and want to check out SWTOR for themselves. This could be one reason why so many mainstream news outlets are now writing about the game. What do you think about these write-ups popping up everywhere on SWTOR?