If you saw the drama unfolding live, you know how funny it was that a BioWare GM apparently threatened action against world PvPers on the Fatman (a PvP server). The alleged threats were done in general chat channels which these appalled players took screenshots of (good going guys!). 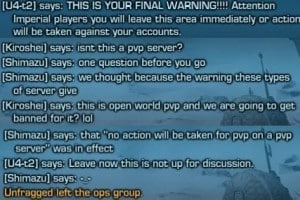 When they first brought the matter to the forums, they were accused of making it up and their accounts were yet again threatened.

Joveth Gonzalez, Associate Online Community Manager said the investigation showed no proof of their claims against this BioWare staff member. 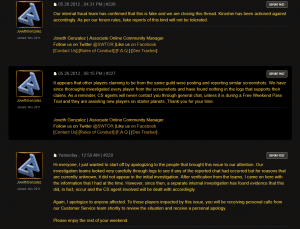 At first it seemed like yet another troll attempt on the game and at this point, with subs and popularity dropping, is there really any need for that?

The drama was not yet over because Gonzalez came back to report that a further investigation proved the accusations against the BioWare GM to be true!

BW reps are not supposed to talk in general chat channels and threatening and harassing these players on a PvP server for PvPing in open world PvP is well… stupid.

Gonzalez assured the CM in question would be “dealt with accordingly” so here’s thinking someone is going to be looking for a new job. The players who were affected were getting a sincere apology and phone call from BioWare customer service. I’m willing to bet they tossed in some free game time or some sort of compensation as an extra apology.

As for the offending employee, why do you think he did it? Was it an honest mistake or someone hopped up on power who took things too far?

Should higher level players be able to “gank” lower level players in open-world PvP? When does regular fair PvP turn into player harassment? These are questions of opinion. If there are no in-game protocols to protect players from a specific location or at a specific level then wouldn’t killing them be “fair play” when on a PvP server?

We want to hear your thoughts!