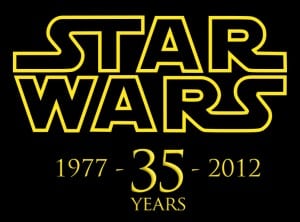 We got so caught up in all of the Mega server news and BioWare Layoffs, that I almost forgot that last Friday was the 35th anniversary of the premiere of Star Wars. On May 25, 1977, George Lucas premiered “Episode IV: A New Hope” and changed the lives of kids like me (I don’t think I saw the movie until later in the summer, when word spread about how good the movie was). In fact, the anniversary has spawned another “holiday”, known as “Geek Pride Day.”

Here’s one of my favorite scenes from the film, the attack on the Death Star (aka the “trench run”). I still get chills watching this:

The effects of Star Wars on the world are too numerous to list here on this blog post. From movie-making techniques to the explosion of science-fiction in books, movies and TV and even YouTube, to video games and beyond, Star Wars is our modern-day myth.

And it’s still going strong with the younger generations. My son is totally obsessed with all things Star Wars (although recently, he’s getting into the Avengers too). We’ve got Lego sets and video games and half his clothing has Star Wars on it. My daughter loves the two princesses, Amidala and Leia. This legacy will last beyond my lifetime, I’m sure.

Sure, there have been some missteps along the way (The “Holiday Special”, Jar Jar Binks), but for the most part, it’s hard to be upset with someone who has brought so much entertainment to millions of people over the past 35 years.

So if you get a chance, tell someone today “May the Force be with them.” And try not to get too upset about Jar Jar Binks.