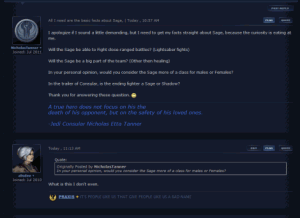 Welcome back to another installment of Intergalactic Intel! Our topic this week is something that isn’t just limited to The Old Republic, but games in general. Being a veteran gamer I’ve seen games change, different communities evolve and adapt. I’ve also seen companies literally go to war with their customers sowing seeds of distrust and discontent. So this week we’re going to go over ways gamers can work with developers to create a better product.

Before you start with a forum post raging about how they nerfed your class, or a fight is to easy or difficult. You need to sit down and view your surroundings first. Are other people having the same issues? Have you researched strategies? Are the strategies feasible? If you post without making sure that your specific issue is an actual issue, all you’ve done is waste time and space.

Everyone is a hero behind a keyboard. A lot of people have no problem telling someone to, “go eat shit and die”. When attempting to communicate with a developer put your pride aside. Don’t start foaming at the mouth at the developer. Put your words in a calm and constructive manner. Never go in with hostility. Constructive criticism gets you a lot more respect.

Step 3: Use all avenues

Majority of the people who play games rarely check the official forums. If you want to get your word out you need to go everywhere. Start discussions in general chat. Tweet interesting articles and blog posts. Post links of facebook. Reddit is one of my personal favorites. Having a good and well thought out opinion is half the battle. The other half is making sure people hear your opinion and stand with you.

Many times developers hear the call of their consumers, but won’t say anything. It doesn’t mean they don’t agree with you or haven’t heard you, but would like to keep things under wraps. There are multiple reasons for why developers won’t respond to a well thought out post, but don’t get discouraged. Keep trying and your point will eventually be addressed.