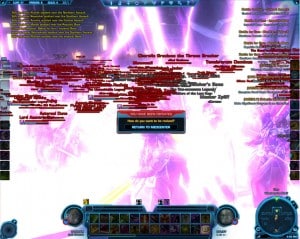 Just how many people are playing SWTOR in the US right now? We keep hearing the term “ghost town” being tossed around but is it really that bad?

Here are the top 20 US servers:

To see more, visit this thread in the SWTOR forums.

To see how they came to these calculations, go here.

So what does all of this mean? When we begin to talk about server transfers (which BioWare has promised are upcoming), it brings up many questions about the servers and their populations. Who will move where? Will you have to worry about your server being too full? Should you move servers instead? Will you move as a guild? What if your guild stays but you don’t want to? Will some servers be forced down (current low pop severs)?
As you may already know, www.torstatus.net codes server status as

This guy’s data tells us that:

Doing all the math, this means:

You can see more stats on this Google doc spreadsheet (or search for your server if it was not in the top 20).

That’s really not a lot of players at all. And definitely not very many per sever. It’s no wonder players are complaining of dead servers and lack of people to group with.

My server has an average population of less than 400… eek!

When are those server transfers coming again BioWare?