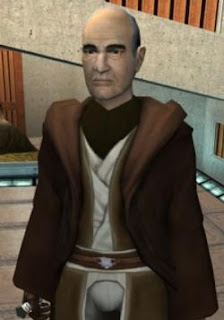 Vrook Lamar was a male Human Jedi Master who fought during the Great Sith War. He served the Jedi Order on both the Jedi High Council and the Dantooine Enclave Council during the Great Hunt, the Mandalorian Wars, and the Jedi Civil War. During his tenure as a Jedi Master he was generally characterized by his brusque manner, stern demeanor, cautious disposition, and suspicious nature. He had high expectations for his Jedi students and a healthy dislike for any subject that touched upon the dark side of the Force.

As Vrook wielded a green lightsaber, he is identified as a possible Jedi Consular before he became a Master, if the lightsaber color-to-specialization mapping from the first KotOR game is considered canonical.

In Knights of the Old Republic II: The Sith Lords, Vrook can teach the player one of the Force or lightsaber forms he knows, depending on what order the Exile visits the planets.

With the Force Power Force Sight (obtained by the Jedi Exile in Knights of the Old Republic II: The Sith Lords) it is shown that Vrook only has a relatively weak light side alignment, perhaps reflecting on his cynical and unforgiving nature.

If the Exile is a Jedi Consular, Vrook demonstrates his mastery of Force lightning while teaching the Exile his Force form.

It is possible to assume that after his outburst in Homecoming, that Vrook is very fond of the power of the Jedi Council and dislikes anything going against it or its orders, which is the same sort of arrogance that took Atris to the dark side.

During the Jedi Exile’s training on Dantooine, Vrook demanded Master Vandar Tokare discipline her after he caught her in a heated argument with his padawan and her master refused to do anything about it. He called her a “mediocre Jedi” with a lust for power that would lead her to the dark side, and also voiced his concern on her influence on the other padawans (many imitated her actions when they saw her). Vandar, however, believed her to be a natural leader and saw her immense potential, and told Vrook that her actions were none of his concern.

Vrook remained on Dantooine during the turbulent years of the Jedi Civil War. After the capture of Darth Revan, he was the sole member of the Enclave council who was against the notion of retraining the former Sith Lord in the ways of the Jedi. He worried that Revan would embrace his former identity as the Dark Lord of the Sith, but his fears would prove groundless. As the former Dark Lord continued to grow in the Force, he remained true to the light side.

As Revan and the crew of the Ebon Hawk searched for the Star Forge, Revan’s former Sith apprentice, Darth Malak, attacked the Jedi Enclave on Dantooine. Vrook and his fellow Council members survived the Sith assault.

After the Jedi Civil War, Vrook was the only member of the Dantooine Council not to participate in the ill-fated Conclave on Katarr. After that shocking event, Vrook and the remaining Jedi decided to go into exile. They hoped that by doing so this new Sith threat – which was hunting the remaining Jedi to extinction – would be lulled into a false victory and reveal itself. During the dark years of the First Jedi Purge, Vrook hid in the ruins of the Dantooine Enclave. The Jedi Exile would later track down the surviving members of the Council. At that time, Vrook was participating in the restoration of the destroyed Dantooine Enclave. During his time in the ruins of the Enclave, he allowed himself to be captured by the mercenaries on Dantooine to deter them from attacking Khoonda. When the Exile heard of his capture, she went to the mercenary base in the near by crystal cave, not knowing of Vrook’s plan. After she slew his captors and released him, he bitterly critized her and explained the situation. Both of them rushed back to Khoonda to help defend it. Vrook left to attack the mercenary camp, and returned in time to help the Exile finish Azkul and his remaining mercenaries.

Although Vrook’s attitude towards the Exile had grown more benevolent following her heroism in the First Battle of Dantooine, he did not allow his feelings to alter his judgment when the newly established Council convened to pass judgment on her once more. Vrook and his fellow Masters, Kavar and Zez-Kai Ell, decided that the Exile was too grave of a threat to the Galaxy and, therefore, decided to permanently strip her of her connection to the Force. While attempting to carry out their sentence, Vrook and the other two remaining Council members were killed by the Sith Lord Darth Traya. But Traya did not kill them because they were Jedi, but because she could not allow them to harm the Exile after the Exile did so much for them. Traya used Force Drain to strip Vrook and the others of the Living Force, killing them.

Vrook’s high expectations of each and every Jedi pupil led many to perceive him as a grumpy, unappeasable individual, although he simply wished for all his students to be strong, capable Jedi. However, he also had a blind conviction in his abilities and teachings—a trait evident when he wanted to punish the Jedi Exile as a Padawan for simply arguing with his own Padawan.

Though he was extremely pessimistic and cynical, Vrook was one of the more active members of the Dantooine Council, often personally mediating disputes. Despite his harsh demeanor, he occasionally showed great concern for the safety of Padawans, as when he rebuked The Revanchist for endangering his pupils in the Mandalorian Wars.

Wielding a green lightsaber, he utilized the Ataru, Shien, Niman, and Juyo combat forms. Lamar was also proficient in the advanced Force forms.