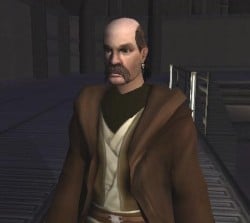 Zez-Kai Ell was a male Human Jedi Master and member of the Jedi High Council during the Mandalorian Wars. He wielded a violet double-bladed lightsaber and fought with double-bladed variants of Ataru, Shien, Niman, and Juyo. He had also mastered the advanced Force forms. He was also close friends with fellow Jedi Master and Council member Kavar.

Zez-Kai Ell was more thoughtful and introspective than many of his fellow Masters, and was quick to point out that the Council’s inaction led to Revan’s fall—even going as far to say that blame was not solely on the Jedi who left to fight, but on the Council as well. After the Jedi Civil War, he no longer considered himself a Jedi, claiming to have left the Order in disgust with both the Jedi Order and himself. Indeed, when the Exile met him, he appeared to have fallen into a brooding depression, displaying something close to a death wish at times during their conversation. Despite this feeling of disillusionment, he still remained loyal to the Order, and continued to trust in Master Kavar’s plan to draw out the Sith by finding the Exile.

If the player chooses to follow the dark side in Knights of the Old Republic II, the Exile and Ell fight on Nar Shaddaa, a battle during which the Exile kills him and learns his lightsaber combat technique. The Exile can still choose to kill Ell should the player take the light-side path.

Zez-Kai Ell appears to be identical to the character Stroth from Star Wars Republic: Show of Force. Presumably the comic character was based on early character designs from the game.

It is possible that Master Ell was not privy to the knowledge that Revan did eventually learn of his true identity but still remained loyal to the Jedi and the Republic. This could partly be the reason he did not believe Revan’s redemption was his own choice. Though it is also possible that he may be referring to the mind-wipe that gave Revan his new identity rather than the events surrounding the Star Forge. 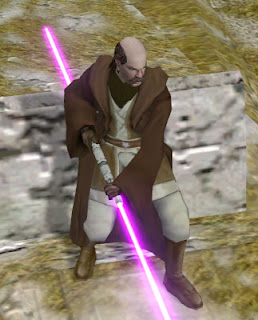 After the Jedi Civil War, with the onset of the First Jedi Purge, Ell went into a voluntary exile on Nar Shaddaa in an attempt to escape detection by the Sith. When he encountered the Exile, he told her that he believed Revan’s redemption had not actually been Revan’s choice, despite the fact that he had learned his identity, and the fact that he had kept to the way of the Jedi before the destruction of the Star Forge, though it is likely from the context of his statement he may have been referring to the mind-wipe itself. He believed that the Council had committed a crime in inserting a new identity over Revan’s dead mind, despite the good that came from it. He also told the Exile that she had done the right thing to take action and fight in the Mandalorian Wars, when so few Jedi had followed her example.

Soon after the Exile sought him out, he gathered with Masters Vrook Lamar and Kavar at the rebuilt Jedi Enclave to answer the Exile’s questions. Ell was eventually killed when Darth Traya used Force Drain on him and the other Masters to strip them of their connection to the Force, after they tried to sever the Jedi Exile from the Force in order to seal the breach she had created.