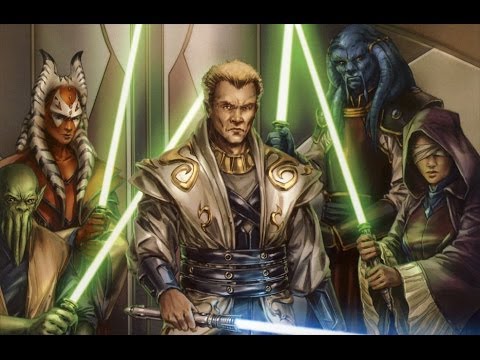 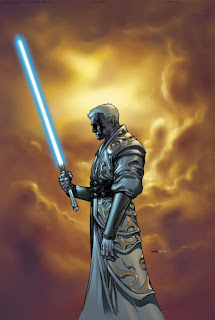 Lucien Draay was a Human Jedi Master stationed at the Jedi Temple on Taris as of 3,964 BBY, and was apparently the leader of the Masters there. He was trained in the Jedi arts by Haazen and eventually trained Zayne Carrick as his own Padawan. He alone of the Jedi Masters on Taris was a Warrior Master, and he wielded a blue lightsaber. He was also a member of the Jedi Covenant.

Biography
Born into a prestigious family with a substantial fortune and respected Jedi heritage, Lucien was son to Krynda Draay (a talented but distant seer) and Barrison Draay (a Jedi warrior who died in the Great Sith War). His mother neglected him in favor of students who, like her, demonstrate clairvoyant aptitude, but Lucien took after his father. Krynda made Lucien the guardian of her young seers circle, becoming First Watch Circle of Krynda’s Jedi Covenant, sworn to prevent the Sith’s return by any means necessary. 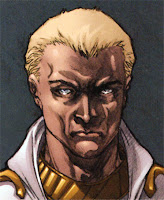 Based on Force sensings of Jedi Master Q’Anilia, Draay had reason to believe that dark changes were brewing in the Force. Therefore, in consultation with his mother and fellow Jedi Masters Q’Anilia, Raana Tey, Xamar, and Feln, Master Draay planned and carried out the Padawan Massacre of Taris. Draay’s own Padawan, Zayne Carrick, escaped the slaughter because he was running late.

Draay was shocked that Zayne, of all the Padawans on Taris, was the one to escape harm. Apparently, the Masters had reason to believe that one of the Tarisian Padawans was to fall to the dark side. However, he was confident in his ability to track down and capture Zayne, having framed him for the murders of the other Padawans. Indeed, Draay was consumed by this search, placing it even above his loyalty to the Galactic Republic.

Draay was particularly close to Q’Anilia (though as a teenager, doubted her and the Miraluka‘s ability) and trusted her insight that Zayne and his ally Marn “Gryph” Hierogryph were headed for Taris’s Undercity. However, Q’Anilia proved to be mistaken and Draay and his fellow Masters had to battle rakghouls and did not discover Carrick. Informed by Master Xamar that sightings of Zayne and Gryph had been made in the Lower City, Draay helped Constable Sowrs lead a force to arrest the duo at Junk Junction. Unfortunately for Draay, Zayne and Gryph escaped on the Last Resort. Master Lucien refused Constable Sowrs’s offer of help to continue the pursuit after Zayne and Gryph left the surface of Taris, telling Sowrs it was “a Jedi problem.”

It was the bounty hunter Valius Ying that captured and brought Zayne into custody to the Jedi Council on Taris. Lucien Draay told Zayne the truth in front of the hunter. He then murdered Ying in cold blood, and Zayne would have been next if not for the surprise rescue from Jarael and the crew of the Last Resort.

Weeks later, after a series of riots breaking out due to the escape of Zayne, Lucien and the other four members of Jedi Covenant lost Taris and were ordered by the Jedi High Council to go to Coruscant—but not before they received a message from Zayne Carrick. He gave them an alleged vision of his own and threatened to hunt them down and force one of them to confess and clear his name.

Upon returning to Coruscant, Lucien and the other masters attempted to meet with Krynda Draay. However, they were denied entrance by the household droid. Lucien met with the Jedi Council and informed them that he might as well have killed the Padawans of Taris. Lucien asked that the Jedi Covenant be leading the search for his renegade Padawan. Master Vrook Lamar denied him and ordered that they be reassigned to separate postings.

Before separating, Lucien was given a report on a “project” by Raana Tey. Lucien once again attempted to see his mother. However, back at the Draay estate, all he found was Haazen who lectured Lucien on how he caused the Covenant to just escape exposure. Lucien demanded to know where his mother was, but Haazen refused to give him a straight answer. Lucien left yelling that there was something that he wasn’t telling him… but there was also something that Lucien wasn’t telling Haazen.

Personality and traits
Though he did not possess his mother’s second sight, he was an able fighter, like his father. A compassionate individual, Lucien loved his mother dearly. However, as a young man, he also resented her because of her constant references to the Sith War, reminding Lucien of the loss of his father. However, his mother’s devotion to the cause eventually carried over to Lucien, and he came to hate the Sith, dedicated himself to preventing their return.

His devotion to this goal eventually turned him into something of a loose cannon within the Jedi, and he performed many questionable actions in the name of saving the future, even attempting to slay his own Padawan. He demonstrated feeling no guilt or remorse for butchering the Padawans of Taris, believing their deaths were necessary to preventing the Sith’s return. During the events of Vindication, Lucien revealed that he believed that one must kill even an innocent life and the potential danger is enough to kill an innocent for the sake of the future, which he demonstrated by orchestrating the Padawan Massacre. His hatred of the Sith even led him to underestimate the Mandalorian threat, and he came to see Republic Intelligence as unreliable. Accordingly, he looked down on Revanchists. Also, Lucien had a habit of using deceit and lies to achieve his goals, such as when he framed Zayne Carrick for the Padawan Massacre, telling a half-truth to the Jedi High Council itself, telling his Watchcircle that his mother approved of the Padawan murders, and telling the Republic Navy that Zayne Carrick was a Mandalorian spy just to prevent Carrick from reaching Coruscant.

In the end, Lucien’s dedication and belief in paying any cost to prevent the Sith’s return left him easily taken in and duped by Haazen’s manipulations. He unwittingly became Haazen’s puppet, and when this was revealed to him during the events of Vindication, his shame led him to seriously consider actively choosing the path. However, he was shaken out of this downward spiral by Zayne Carrick, the very Padawan he attempted to kill. Remembering his father’s perseverance in the face of incredible odds, Lucien followed his father’s example, and rebelled against Haazen.

After the events of Vindication, Lucien accepted his mistakes with humility. Realizing that fate is impossible to avoid or prevent, he resolves to instead embrace it and adapt.