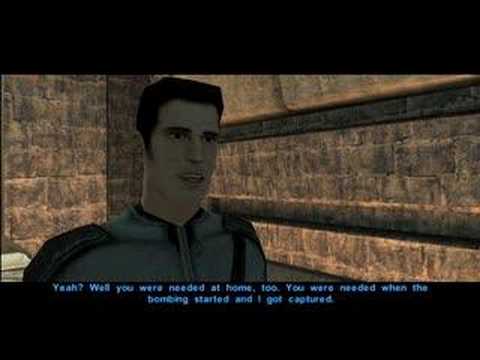 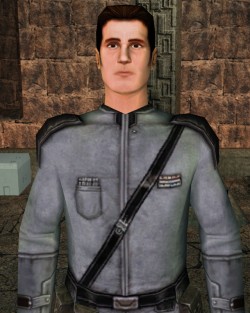 Dustil Onasi was a member of the Onasi family, and son of the war veteran Carth Onasi who served the Galactic Republic Navy during the Mandalorian Wars, Jedi Civil War and aftermath at the Battle of Telos IV.

Dustil was born on Telos IV and raised mostly by his mother due to his father being of the soldiery. During the bombardment and destruction of Telos IV’s surface during the Jedi Civil War, his mother was killed and Dustil was assumed dead, but in fact he survived and gained dislike for the Galactic Republic and his father for their inability to save Telos IV. He, as a Force-sensitive, trained in the Dreshdae colony of Korriban at the Sith Academy to become a Dark Jedi. However, he was discovered by his father and Revan and convinced to return to the light. He also convinced several of his friends to turn from the dark side, and promised to meet again with his father on Telos. It is unknown if this reunion ever occured, or what became of Dustil in the aftermath of Jedi Civil War.


Early Life
Dustil was born on Telos IV and raised mostly by his mother due to his father’s constant absence as a soldier in the Republic Navy. During the bombardment and destruction of Telos IV’s surface during the Jedi Civil War, Dustil’s mother was killed and he was assumed dead. In reality he had survived, but developed a strong dislike for both the Galactic Republic and his father for their inability to save Telos IV.

Sith Training
Some time later, a friend of Dustil’s named Selene convinced him to join the Sith Academy on Korriban. He quickly became one of the more promising students there. He was strong with the Force and proficient in combat, and soon attracted the watchful eye of the academy’s headmaster, Uthar Wynn.

While training, Dustil developed a relationship with Selene, who was also a student at the academy. This distressed Master Uthar, who felt that such an emotional entanglement would hinder his best student’s progress. The conniving Sith Master secretly had the young woman murdered and then lied to Dustil about the occurrence. 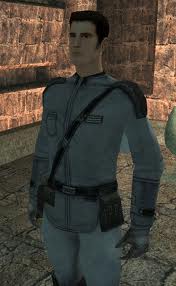 Redemption
During the Jedi Civil War Dustil was discovered by his father and Revan as he was training at the Sith Academy. Carth, hurt by the choices Dustil had made, tried to talk with him and convince him to turn away from the Sith. Dustil refused, still blaming his father for his mother’s death, and believing the Sith to now be his true, caring family.

When Revan and Carth found a journal of Master Uthar’s detailing the events of the treachery against Dustil, they decided to show it to the young man as proof that the Sith were truly evil. With this newfound knowledge, an emotionally distraught Dustil was convinced to forsake the Sith and their teachings.

Dustil promised to eventually meet his father on Telos IV, where they could begin to repair their relationship. But instead of immediately leaving the academy, he decided to remain on Korriban to try and help as many of his friends as possible.

It is unknown if the reunion between father and son ever occurred, or what became of Dustil in the aftermath of the Jedi Civil War.