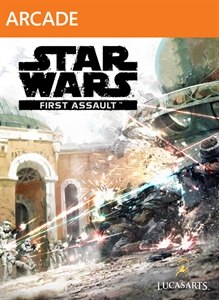 There could be a new Star Wars game on the way and while it has not been officially released yet, there is some info going around the gaming communities about it. The mysterious LucasArts project that has had rumors flying for some time, appears to be an Xbox LIVE Arcade title.

Back in August, it was discovered that LucasFilm had purchased a series of domain names related to something with Star Wars and this unknown title. Now, according to a listing on Xbox.com, via NeoGAF, Star Wars First Assault will be an XBLA game but it has not been officially confirmed by LucasArts yet.

A new Star Wars game is headed to Xbox Live Arcade, according to an eagle-eyed NeoGAF forum user.

The game has not yet been announced by LucasArts, but it is not entirely a mystery. In August, the company filed a trademark application for Star Wars: First Assault for “interactive video games,” among other things. Additionally,www.StarWarsFirstAssault.com currently redirects to the official Star Wars website.

A LucasArts representative told IGN, “It is an exciting time at our company right now, however, we don’t have any announcements at this time.”

We really don’t know anything yet about what the game will be like but based on the cover art, it’s possible it could be a shooter, similar to Battlefront. A Star Wars shooter could likely do very well on Xbox platform.

What do you think the new game is going to be about and are you going to want to play it?