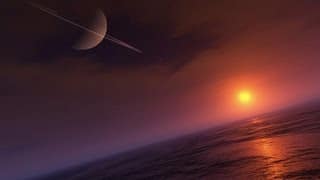 The Greeks believed the titan Prometheus gave humanity the great gift of fire. Throughout history, a select group of humans (from Thales to Kepler, Galileo, Newton, Darwin, Maxwell and Einstein, among many others), have given the rest of humanity an even greater gift: science and the scientific method. No other discipline is as self-critical as science, and no other discipline is able to deliver the goods so consistently. If you don’t already love it, you’ll fall in love with it after watching this documentary.

When the Voyager One Deep Space Probe (famous for carrying the golden record assembled by Carl Sagan and his team) flew by Saturn in the early 1980’s, it took the first set of detailed pictures of the ringed planet and its moons, and one moon clearly stood out: Titan. It then became obvious we had to go back. Roughly half the diameter of Earth, with its chemistry, thick atmosphere and geological activity, Titan is the best candidate in the solar system for having the ability to sustain life.

This is the dramatic story of the nearly two-decade Cassini-Huygens mission to attempt to fly back and study Titan by landing on it. The graphic delivery of the documentary is epic, as is its musical score. The findings of this mission will surprise you, especially the differences in the similarities between Titan and Earth (and no, that’s not a contradiction). I’m sure you’ll agree that the amount of logistical obstacles scientists have had to overcome, as well as the precision of their calculations, even when they fail, is truly a testament to the beauty and power of science and its error-correcting mechanisms.