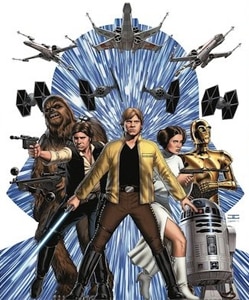 More fun Star Wars news to come out of Comic-Con – three new Star Wars titles. The three titles will take place between “A New Hope” and “The Empire Strikes Back”, during the aftermath of the Death Star’s destruction. It will explore both the Rebel Alliance and the Galactic Empire stories. This new line of comics will come in January 2015, a good time for Marvel Entertainment as they have already revealed they will be releasing their first in a series of hardcover collections of the original comics.

Hollywood Reporter has some details:
The announcement was made at Marvel’s “Cup o’ Joe” panel at San Diego Comic-Con Saturday afternoon, and followed the January announcement that Marvel had been awarded the comic book license for the Disney property, as well as the news earlier this month of a series of hardcover collections of Marvel’s earlier Star Wars material.

So now we have something new to look forward to. The only downside some fans are worried about is that with the new continuity guidelines with the canon, Marvel will be very limited with the timelines in which they can make things happen. Some fans worry that since they won’t have the same freedom that Dark Horse had, it will place limitations on the story within the comics.

What do you think? Are you a fan of the comics? Are you looking forward to these new titles? Do you think Marvel will do a great job of bringing us great story AND great art in the new titles?